What are advantages and disadvantages of different load balancing?

What are advantages and disadvantages of different load balancing?

In the initial stage of website creation, we generally use a single machine to provide centralized services, but as the business volume increases, there are greater challenges in terms of performance and stability.

At this time, we will think of providing better services through expansion.

What is load balancing?

In the initial stage of website creation, we generally use a single machine to provide centralized services, but as the business volume increases, there are greater challenges in terms of performance and stability.

At this time, we will think of providing better services through expansion.

We generally group multiple machines into a cluster to provide external services.

So when the user enters www.xxx.com in the browser, how to distribute the user’s request to different machines in the cluster? This is what the load balancing is doing.

Most current Internet systems use server cluster technology. The cluster will deploy the same service on multiple servers to form a cluster to provide services to the outside world.

In practical applications, there will always be a load balancing server before the Web server cluster.

The task of the load balancing device is to serve as the entrance to the Web server traffic, select the most suitable Web server, and forward the client’s request to it for processing.

Transparent forwarding from the client to the real server.

The “cloud computing” and distributed architecture, which has been popular in recent years, essentially use back-end servers as computing resources and storage resources, which are packaged into a service provided by a certain management server, and the client does not need to care about what the service is really provided.

Which machine is it, from its perspective, it is as if it is facing a server with almost VPN capability, and in essence, the back-end cluster is the real service provider.

The two core problems solved by software load are: who to choose and forwarding, among which the most important is LVS (Linux Virtual Server).

The topology of a typical Internet application is like this: 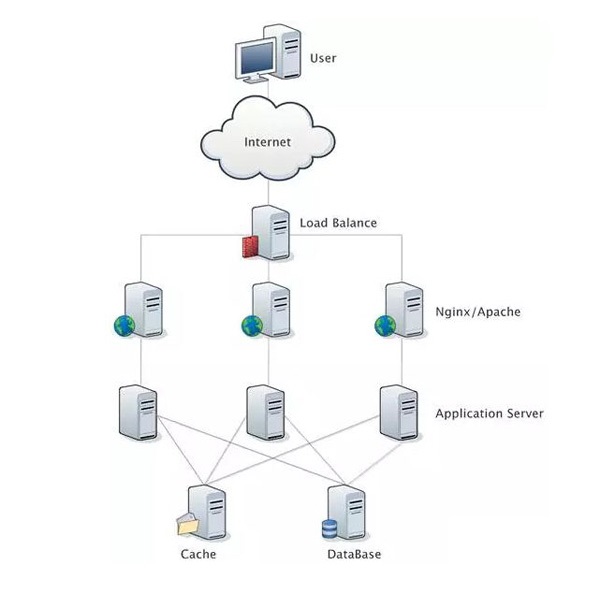 Now we know that load balancing is a computer network technology that is used to distribute load among multiple computers (computer clusters), network connections, CPUs, disk drives or other resources, in order to achieve optimized resource usage and ** *The purpose of reducing throughput, minimizing response time, and avoiding overload at the same time. Then, there are many ways to realize this kind of computer technology.

It can be roughly divided into the following types, among which the most commonly used are the 4-tier and 7-tier load balancing:

The load balancing server still provides a VIP (virtual IP) externally. Different machines in the cluster use the same IP address, but the MAC addresses of the machines are different.

After receiving the client’s request, the 4-tier load balancing server forwards the traffic to the application server by modifying the address information (IP+port number) of the data packet.

These application layer protocols will contain a lot of meaningful content. 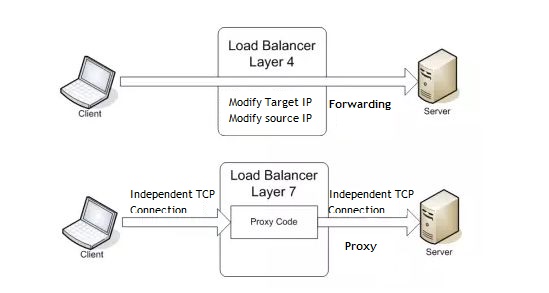 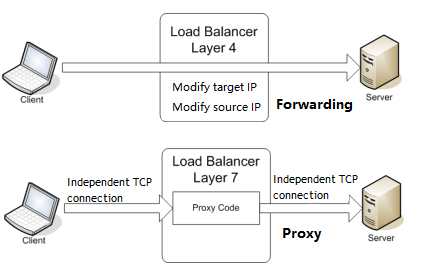 Hardware load balancing has superior performance and comprehensive functions, but it is expensive, and is generally suitable for long-term use by early or local companies.

The goal of using LVS technology is to achieve a high-performance and highly available server cluster through the load balancing technology provided by LVS and the Linux operating system, which has good reliability, scalability and operability. So as to achieve the best service performance at a low cost.

The server cluster system set up by LVS consists of three parts: the front-end load balancing layer (Loader Balancer), the middle server group layer, represented by Server Array, and the *** layer data shared storage layer, represented by Shared Storage. In the eyes of users, all applications are transparent, and users are just using high-performance services provided by a virtual server. 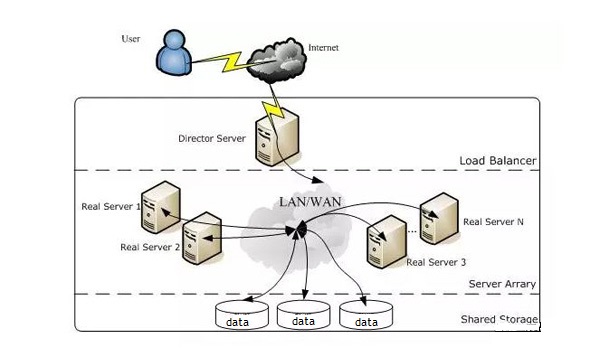 Detailed introduction of each level of LVS:

Load Balancer layer: Located at the forefront of the entire cluster system, it consists of one or more load schedulers (Director Server).

The set routing table distributes the user’s request to the application server (Real Server) of the Server Array layer through these routing tables.

Remove it from the LVS routing table when the Real Server is unavailable, and rejoin it when it is restored.

Real Server can be one or more of Web server, Mail server, FTP server, DNS server, and video server. Each Real Server is connected by a high-speed LAN.

Or connected to WANs distributed in various places. In actual applications, Director Server can also concurrently play the role of Real Server.

Shared Storage layer: It is a storage area that provides shared storage space and content consistency for all Real Servers. Physically, it is generally composed of disk array devices.

In order to provide content consistency, data can generally be shared through the NFS network file system, but NFS In a busy business system, the performance is not very good.

At this time, cluster file systems can be used, such as Redhat’s GFS file system, or Oracle’s OCFS2 file system.

Linux 2.6 kernel can support LVS functions without any settings, while FreeBSD is the application of Director Server.

Not a lot, and the performance is not very good. For Real Server, it can be almost all system platforms, Linux, windows, Solaris, AIX, BSD series can be well supported.

Nginx (pronounced as engine x) is a web server that can reverse proxy HTTP, HTTPS, SMTP, POP3, IMAP protocol links, as well as a load balancer and an HTTP cache.

The basic working mode of Nginx 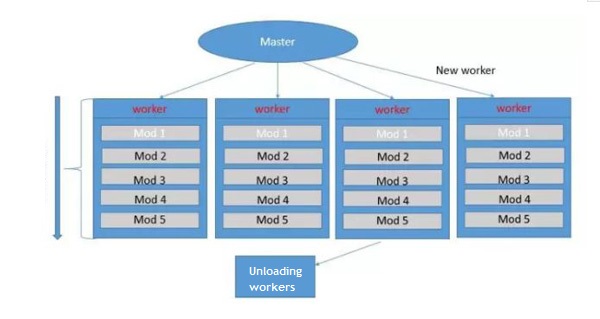 A master process spawns one or more worker processes. But here the master is started as root, because Nginx needs to work on port 80. Only the administrator has the authority to start ports less than 1023.

When the worker is started, it is only responsible for some of the simplest tasks of the web, and other tasks are implemented by the modules called in the worker.

The modules implement functions in a pipeline manner. Pipeline refers to a user request, which is realized by combining the functions of multiple modules in turn.

How do they implement hot deployment? That’s the case. We said earlier that the master is not responsible for specific work, but calls the worker to work. It is only responsible for reading the configuration file.

Therefore, when a module is modified or the configuration file changes, it is The master reads, so the worker’s work will not be affected at this time.

When the worker finishes its work, the child process is directly pawned, replaced with a new child process, and the new rules are used.

HAProxy is also a load balancing software that is widely used. HAProxy provides high availability, load balancing, and proxy based on TCP and HTTP applications, supports virtual hosts, and is a free, fast and reliable solution.

Especially suitable for those Web sites with heavy load.

The operating mode makes it easy and safe to integrate into the current architecture, while protecting your web server from being exposed to the network.

HAProxy is a free and open source software written in C language, which provides high availability, load balancing, and application proxy based on TCP and HTTP.

When one of the servers fails on the second to seventh layers, BIG-IP takes it out of the sequential circular queue and does not participate in the next polling until it returns to normal.

Different servers are requested to be dispatched in turn in a polling manner; when implemented, the servers are generally weighted; this has two advantages: different loads can be allocated according to the performance differences of the servers; when a certain node needs to be removed, only You need to set its weight to 0;

the request is randomly distributed to each node; a balanced distribution can be achieved in a scenario where the data is large enough;

calculate the node that needs to fall according to the key, which can ensure that the same key must fall on the same server;

When a node of the server fails, only the key on this node is affected, and the guarantee rate is guaranteed; such as the ketama scheme in twemproxy; it can also be planned and specified in the production implementation. Sub-key hashing to ensure that keys with locally similar characteristics can be distributed on the same server;

Load according to the range of keys:

Load based on the modulus of the key-to-server node number :

load based on the modulus of the key-to-server node number; for example, there are 4 servers, the key modulo 0 falls on the *** node, and 1 falls on the second node. Point.

According to the processing capacity of CPU, IO, and network to decide how to schedule the next request.

No need for active load balancing :

use the message queue to switch to the asynchronous model to eliminate the problem of load balancing; load balancing is a push model that always sends data to you, then all user requests are sent to the message queue, and all downstream nodes Whoever clicks is free, who comes up to fetch data processing; after switching to the pull model, the problem of load on downstream nodes is eliminated.

Assign a weighted value to each server as a ratio. Based on this ratio, the user’s request is allocated to each server. When a layer 2 to 7 failure occurs in one of the servers, BIG-IP takes it out of the server queue and does not participate in the next user request allocation until it returns to normal.

Group all servers, define priority for each group, BIG-IP user request, assign to the server group of priority *** (in the same group, use polling or ratio algorithm, assign User’s request); When all servers in the *** priority level fail, BIG-IP will send the request to the second priority server group. This method actually provides users with a hot backup method.

Pass new connections to those servers that perform the least connection processing. When a layer 2 to 7 failure occurs in one of the servers, BIG-IP takes it out of the server queue and does not participate in the next user request allocation until it returns to normal.

Pass the connection to the server with the fastest response. When one of the servers fails on the second to seventh layers, BIG-IP takes it out of the server queue and does not participate in the next allocation of user requests until it returns to normal.

The number of connections and response time are based on the optimal balance of these two items to select a server for the new request. When one of the servers fails on the second to seventh layers, BIG-IP takes it out of the server queue and does not participate in the next allocation of user requests until it returns to normal.

Predictive mode (Predictive): BIG-IP uses the collected server’s current performance indicators to perform predictive analysis, select a server in the next time slice, and its performance will reach the request of the corresponding user of the *** server. (Detected by BIG-IP)