Azure CTO will fight Git again: the most unintuitive and cumbersome

Azure CTO will fight Git again: the most unintuitive and cumbersome After he recommended to deprecate C/C++.

Following the call to deactivate C/C++ for new projects and use Rust , a new social dynamic of Git from Mark Russinovich , Microsoft Azure CTO and Sysinternals main developer, has caused widespread discussion. He stated:

Git is making me want to pull my hair out again. It’s one of the least intuitive and clunky interfaces of any software I’ve ever used.

In fact, Mark Russinovich is not the first nor the only person to feel this way, and many people expressed their resonance in the comments. Someone pointed out , “As far as I know, even Linus hates it”.

One of the high praise comments also pointed to a page ( ohshitgit.com ) that complained about Git, which was even translated into different language versions spontaneously by dozens of developers in different countries. 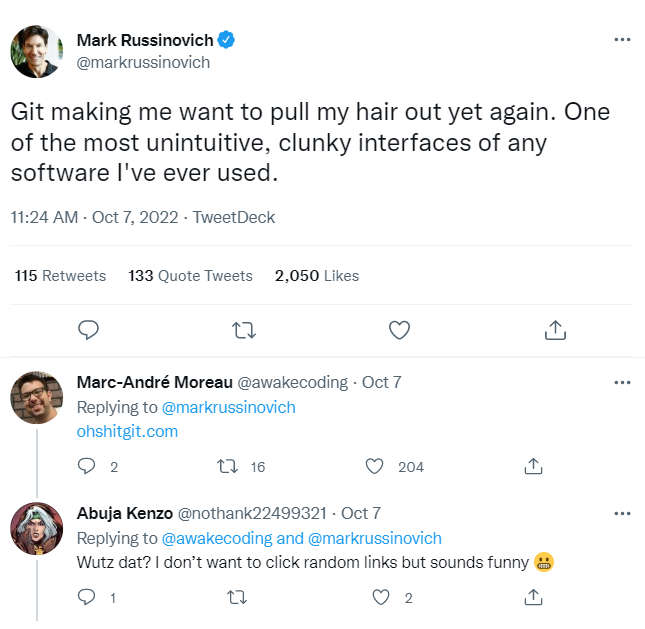 ” Using Git well is hard: it’s so easy to make a mistake and then try to make up for it, it’s just too hard. Going through the Git documentation is a chicken-and-egg problem, you have to know what you want What , but if I knew, I’d be looking up a fucking doc! “

The author of the webpage also shared in detail some of the crazy moments he encountered when using Git, and provided the solutions he adopted:

In response to Mark Russinovich’s speech, some people said excitedly that they had been bothered by Git for a long time, and now finally an authority figure came out to speak.

According to Wikipedia , Mark Eugene Russinovich (born December 22, 1966) is a Hispanic-American software engineer who is currently the CTO of Microsoft Azure. Before being acquired by Microsoft in 2006, he was the co-founder of software maker Winternals.

Mark Russinovich first got his hands on computers in the 1970s when his friend’s father got an Apple II. At that point, he was able to reverse engineer and program his ROM. At 15, he bought himself his first computer, a Texas Instruments TI99/4A. He is also the author of the novels Rogue Code, Zero Day and Trojan Horse, Windows Internals, Sysinternals tools. In 2005, he also discovered the Sony DRM anti-copy program incident that caused great repercussions in the industry .