Will A song crash your Windows PC?

Will A song crash your Windows PC?

On August 18, Microsoft recently revealed a crazy story about a song that crashed Windows XP laptops.

The song in question is “Rhythm Nation” by American pop singer Janet Jackson.

What caused the computer to crash was that the song contained one of the natural resonant frequencies of 5400 RPM hard disk drive (HDD) models, which is common in laptops even today.

In fact, even laptops that weren’t playing the song nearby would crash.

To fix this, device makers had to add a filter for specific frequencies to prevent the computer from crashing, which detected and removed troublesome frequencies during audio playback.

If you have new computer equipment such as Windows 10 and Windows 11, listening to this song will not cause your PC to crash, although some PCs running Windows XP cannot be ruled out.

Of course, any story about natural resonant frequencies can’t be separated from the collapse of the Tacoma Narrows Bridge in 1940 (light to moderate winds can cause the bridge to sway back and forth, and more in the center. Eventually the serpentine resonance collapses) .

Additionally, Larry Osterman had a similar experience with a particular game that crashed the prototype PC. 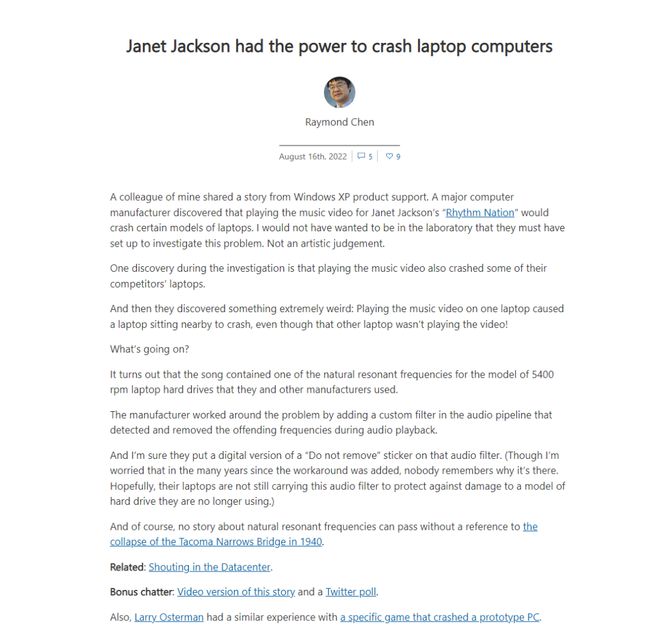 Another gossip came out on the same day that Microsoft’s internal employees believed that the company’s salary increase this year did not meet the established commitments, nor could it keep up with the rate of inflation in the United States.

Many employees plan to move to other companies after releasing their performance in September.

Earlier this year, Microsoft pledged to pay big raises to prevent its employees from jumping to rivals such as Amazon.

Subsequently, company employees generally began to pay attention to how much their compensation would increase.

But according to some Microsoft employees, the pay rise is simply not enough to keep them at Microsoft.

These employees said that September 15 this year will be the day when Microsoft pays employees salaries and bonuses according to the new salary scale, and many employees may leave at that time.

“Microsoft has an unspoken rule that if you want to get what you deserve, you have to jump ship and come back, and this unspoken rule has exacerbated the turnover rate of Microsoft employees,” said the Microsoft employee, who planned a Sept. 15 meeting. Stay at Microsoft until the bonus is paid, and then move on based on the salary levels offered by other companies.