Wi-Fi 6 is officially out of date: Waiting for the Wi-Fi 7 router

Wi-Fi 6 is officially out of date: Waiting for the Wi-Fi 7 router.

In 2019, the first mobile phones supporting Wi-Fi 6 were launched, ushering in the era of Wi-Fi 6.

The evolution of Wi-Fi seems to be going “overdrive.” This makes people curious to ask: what exactly is stepping on the accelerator of the “acceleration” of Wi-Fi evolution?

Why does the evolution of Wi-Fi “step on the accelerator”?

Wi-Fi 6 has been a hot topic since its commercial launch in 2019.

Compared with the previous generation Wi-Fi 5 standard, the maximum throughput of Wi-Fi 6 has been increased from 3.5Gbps to 9.6Gbps, which is more than doubled.

Since the release of the Samsung Galaxy S10, the first mobile terminal supporting the Wi-Fi 6 standard in February 2019, Wi-Fi 6 terminal devices have quickly occupied the market.

With the large-scale shipment of devices supporting the Wi-Fi 6 standard after 2020, Wi-Fi 6 devices have become mainstream in the market in just two years.

According to data from the Wi-Fi Alliance, by the end of 2021, shipments of terminal products such as mobile phones and tablets that support Wi-Fi 6 have exceeded 2 billion.

It is estimated that in 2022, the proportion of terminal shipments supporting the Wi-Fi 6 standard will reach 56%.

And just as Wi-Fi 6 begins to conquer the market , the more advanced Wi-Fi 7 has quietly arrived.

When talking about why the iteration time of Wi-Fi 7 is so fast, Hu Peng, product marketing manager of Qualcomm Technologies, said, “On the one hand, this is the joint cooperation between Qualcomm and all participants in the industry to cooperate with the evolution and trend of industry standards to promote Wi -Fi 7. -The result of joint efforts in the development of Fi technology.

On the other hand, it is driven by market demand.

Whether it is the metaverse or edge computing, there are higher requirements for network bandwidth and latency, and more advanced solutions are required. ,This point is very important.

This is indeed the case. On the one hand, Qualcomm’s Wi-Fi 6E (an upgraded version of Wi-Fi 6) has brought some of the features of Wi-Fi 7 into the product, promoting the iteration of Wi-Fi technology.

On the other hand, with the rapid development of science and technology, scenarios such as metaverse and intelligent manufacturing have become people’s new expectations for future digital life.

To truly realize these scenarios, it is inseparable from the progress of communication technology.

Whether it is the metaverse or smart manufacturing, higher bandwidth and lower latency networks are needed to support them.

Take the metaverse as an example. In people’s imaginations, the ultimate form of the metaverse is a virtual space in which people can live.

Highly realistic character modeling and environments will bring an immersive sense of immersion to the Metaverse, while sight, hearing, and touch together form the perception of the prosperous world in the Metaverse.

This also means that in the interaction between users and the metaverse world, massive amounts of information need to be transmitted in real time.

Similar to the needs of the Metaverse, with the continuous improvement of the intelligence of factories, the amount of data output by factories is also rising rapidly.

After sensors deployed in various places continuously obtain visual and time series data in production, the obtained data needs to be transmitted to the edge or cloud for analysis and processing through the network, and network latency and stability are both critical to smart factories.

It is the rapid development of these emerging innovative applications and the strong demand for a new generation of high-bandwidth and low-latency communication technologies that have prompted the Wi-Fi technology to complete a “quick” iteration, ushering in a comprehensive improvement of Wi-Fi 7 in 2022. 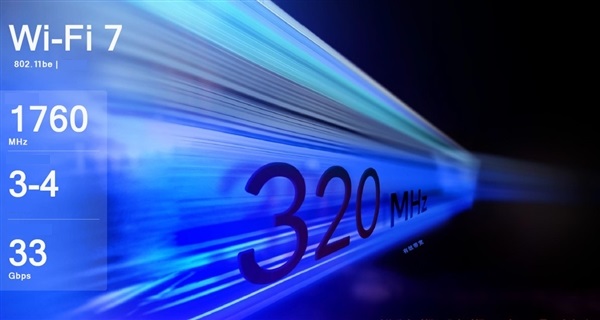 First, the new 6GHz band was introduced in the Wi-Fi 7 standard.

The increase in bandwidth gives Wi-Fi 7 a leap in speed over Wi-Fi 6.

This is also the reason why the maximum throughput of Wi-Fi 7 can reach a new high, which is more than twice as high as that of Wi-Fi 6.

Faster Wi-Fi 7 can not only provide people with a more stable and high-speed network connection in work and game environments, but also improve user experience.

Moreover, it can better meet the requirements for high throughput of network communication in high-load application scenarios such as Metaverse and smart factories.

Moreover, the addition of the 6GHz band can also “shunt” some devices that were originally “squeezed” in the 2.4G or 5G band, thereby reducing the probability of data “clogging” and mutual interference between devices.

In the era of Wi-Fi 6, Qualcomm has applied this technology, allowing the terminal to establish communication with the router through the two frequency bands of 2.4GHz and 5GHz at the same time, which greatly improves the experience of using Wi-Fi.

With the introduction of the new 6GHz frequency band in the Wi-Fi 7 standard, multi-connection technology has also ushered in an upgrade.

In Wi-Fi 7, the multi-connection concurrent technology allows users and routers to communicate through 5GHz and 6GHz frequency channels at the same time.

With the support of multi-connection technology, the device can automatically change frequency bands in a highly congested network environment, maximizing the use of high-performance 5GHz and 6GHz frequency bands to achieve maximum throughput and minimum latency.

Thanks to its advantages in multi-connection concurrent technology, the third-generation professional networking platform based on Wi-Fi 7 released by Qualcomm can achieve deterministic low latency in a challenging shared wireless environment, bringing spectrum comparable to the private domain application performance.

The modulation capability of Wi-Fi 7 has also been upgraded compared to the previous generation technology.

According to the rate calculation formula of the Wi-Fi standard, the rate of the whole machine is proportional to the QAM encoding method.

Upgrading the modulation method can significantly increase the rate. The speed of Wi-Fi 7 is increased by about 20% with the upgrade of QAM.

It is worth noting that Qualcomm has always been one step ahead in the innovation of modulation methods.

As the leaders of communication chips, Qualcomm, Broadcom and MediaTek have all actively invested in the development of Wi-Fi 7 commercial solutions, of which Qualcomm is the leader.

This solution has the power of high throughput and low latency.

Its maximum throughput can reach 5.8Gbps, and the latency can be kept below 2ms, while the power consumption is reduced by nearly 50% compared with the previous generation products.

And the solution supports all Wi-Fi 7 features including concurrent multi-frequency connections and 4K QAM.

Get the lowest latency and interference, stable connections, and high-speed network communications. And the solution also improves the sound quality of Bluetooth audio, allowing users to get a better audio experience.

They support key Wi-Fi 7 features including 320MHz bandwidth, 6GHz channels, and boast up to 33Gbps wireless interface capacity and over 10Gbps peak throughput.

The Qualcomm 1620 professional networking platform of the network system has a wireless interface capacity of up to 33Gbps and 16 data streams.

The release of Qualcomm’s third-generation professional networking platform shows that Qualcomm already has end-to-end Wi-Fi 7 products and can provide a complete Wi-Fi 7 solution.

This also marks that Qualcomm has taken the lead in completing the establishment of a complete Wi-Fi 7 product ecosystem.

The third-generation Qualcomm professional networking platform not only has a wireless interface capacity of 33Gbps and a peak throughput of more than 10Gbps, which breaks the performance “ceiling”, setting a new benchmark for wireless communication technology, but also continues Qualcomm’s innovation and optimization for multi-user environments.

To this end, Qualcomm chose to actively cooperate with downstream manufacturers to jointly create a richer and more professional ecosystem.

At present, Qualcomm has established long-term and stable cooperative relations with OPPO, vivo, Xiaomi, Honor, ZTE and other manufacturers.

On the routing side, at present, its professional networking platform has obtained 275 product designs from many brands including Cisco, H3C, Netgear, TP-Link, Linksys, and Xiaomi in the past three years. Complete ecological network.