Why does Germany still refuse to restart nuclear power plants?

With such a shortage of energy: Why does Germany still refuse to restart nuclear power plants?

Scholz didn’t care. “If the world were as simple as you ask, our lives would be very good,” he said.

This is an old question

Bernhard isn’t alone in raising the issue. With the EU imposing sanctions on Russian coal and some calling for an embargo on Russian oil (3, 0.00, 0.00%) and gas, there are growing calls for nuclear power to fill the resulting energy gap.

But in fact, this is not a new issue. Many people have raised similar issues long before the outbreak of the Russian-Ukrainian conflict. In December last year, the German Clean Energy Wire website published an article titled “Why Germany is phasing out nuclear energy, why now? ” article.

The belief that nuclear energy should not be part of Germany’s energy mix is ​​long-standing and deeply rooted in German society.

Germany is also the first country in the world to have the Green Party as one of the governing coalitions. In the 1980s, there was an alliance between the Social Democrats and the Green Party.

In 1998, when the Social Democrats and Greens coalition took over from the Conservative government, they reached a “nuclear consensus” with the big utilities that operate nuclear plants to gradually shut down the plants, with the last to close in 2022.

Before the Fukushima nuclear leak, in 2009, Merkel used her credibility and the identity of a female doctor of physics to extend the time for complete nuclear abandonment from 2020 to 2036, and said to the public, “I always believe that the shutdown does not emit carbon dioxide. It is very absurd”, “Japan, which is as rigorous as us, is also using nuclear energy, why can’t we”.

On the third day of the accident, Merkel announced the suspension of the plan to postpone the nuclear power plant until 2036, and announced the closure of 8 of the 17 nuclear reactors four months later, and the remaining 9 will be closed by 2022. 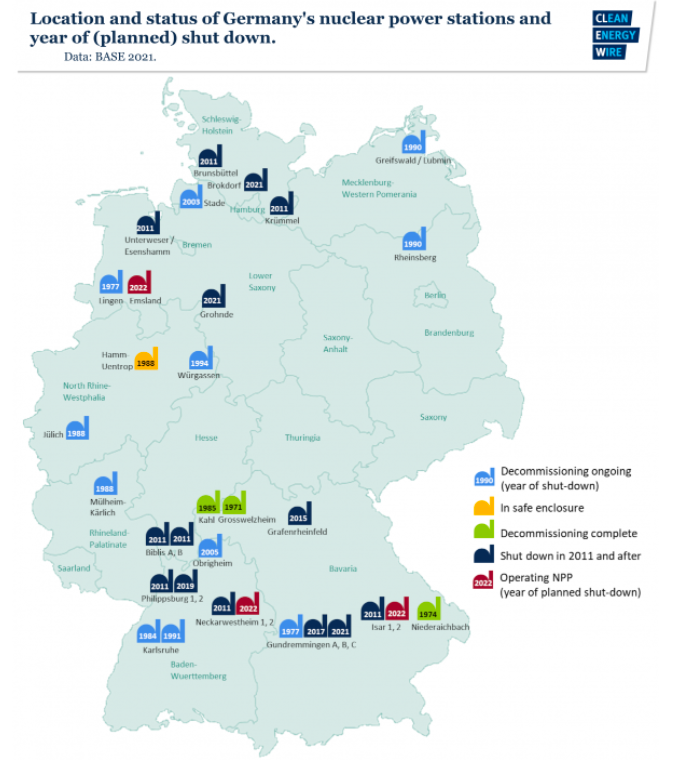 By 2022, only three nuclear power plants remain in operation in Germany (shown in red)

Germany’s abandonment of nuclear power is due to public opinion: German polls last year showed that 90% of people opposed building new nuclear power plants, and 62% agreed to replace nuclear and coal with solar and wind power.

The German public has supported a permanent exit from nuclear power since 2011, when the Bundestag voted in a majority vote on the latest denuclearization plan.

The German government has stood by its decision since 2011. At a news conference ahead of the end of her term as chancellor, Merkel reiterated that “phasing out nuclear power is the right thing for Germany to do”, adding that other countries and activists pushing for climate neutrality may see this differently . “I don’t think nuclear energy is a sustainable form of energy in the long run,” Merkel said.

“Nuclear energy will make our energy supply neither safe nor cheap. A technology that does not solve the problem of toxic waste disposal is not sustainable.”

“Germany’s denuclearization has been decided and is clearly stipulated by law and is valid. Germany’s security of supply continues to be guaranteed. Now, it is important to continue to advance the transformation of our energy supply.”

The article on the German Clean Energy Wire website concludes:

Even if the nuclear issue is raised for climate protection reasons, now Germany’s denuclearization has gone too far to be reversed, and there is simply no influential political force that would consider restarting the decade-long nuclear debate Painful debate.

The current government says it will not change its stance

The current German government said it would not change its position. It cites technical reasons, but the biggest debate is likely to be political, especially for the Green Party, which controls the economy ministry.

Germany’s high reliance on Russian gas is particularly acute for heating and industry. However, nuclear energy has not played a role in either.

The three nuclear plants still in operation – Isar 2, Emsland and Neckarwe (6.48, 0.07, 1.09%) stheim 2 – do not contribute much to Germany’s energy balance: they have a capacity of just 4.3 gigawatts, providing an average of approx. 30 TWh of electricity, only 5% of Germany’s total electricity generation.

2. Any decision to extend the life of a nuclear power plant will require a new comprehensive risk assessment

The government says the risks associated with nuclear power have increased – as evidenced by the threat of cyberattacks to critical infrastructure.

During the Russian-Ukrainian conflict, the power supply lines of the Chernobyl nuclear power plant were damaged, which also exposed some of the external risks faced by nuclear power.

3. The supply of uranium fuel rods will be insufficient

The government said the three existing nuclear plants, without new uranium fuel rods, could continue to operate beyond the end of the year, but new fuel assemblies would take 12-15 months to produce and be ready by the summer of 2023 at the earliest.

According to Eurostat, Russia is the second largest supplier of uranium to EU nuclear power plants.

The government said the last three nuclear power plants underwent safety inspections in 2009, so extending the plants would have to carry out new inspections, which could lead to the need for “huge investment” in safety technology.

The required security checks amount to re-licensing, which is a very time-consuming process: they must meet the latest scientific and technical standards, and these can become so demanding that potential operators Unattractive.

5. Operators have no interest in extending the life of nuclear power plants

Operators of the remaining plants have said they have no interest in keeping the reactors running.

After years of struggle, Germany’s big utilities have embraced the future of renewable energy and the end of nuclear power.

They also noted that all legal (compensation) issues for denuclearization have been resolved, operating licenses will expire and will be difficult to regain, contracts with suppliers and other service companies have been terminated, staff have been reassigned, and fuel supplies will end .

According to the Financial Times, Frank Mastiaux, chief executive of EnBW, which operates Neckarwestheim 2, said: “With our current technological setup, extending the life of a nuclear power plant by a few weeks is not possible,” he added. “We don’t have any legal framework to run it for even a minute in 2023. It’s out of our control.”

Eon, the operator in charge of Isar 2, shares a similar sentiment, with CEO Leo Birnbaum saying:

“Nuclear energy has no future in Germany – that’s it. Anti-nuclear sentiment is too strong for legislation and public opinion to change.”

The operators also made it clear that even if there was an energy crisis and the government forced them to restart nuclear plants, they would insist on taking all risks and costs. “They are reluctant to put shareholders at risk of catastrophe,” an official said.

“The problem is that the operators don’t trust the government at all,” said Thomas O’donnell, a German energy analyst and nuclear physicist. To restart nuclear plants, they need “political assurances that nuclear power is still legal in Germany,” and that the policy will be in the future It will not be cancelled – that should be the responsibility of all governments.

For the German chancellor, however, such a potentially blank cheque is impossible to write.