What technologies do Wi-Fi 6 use to solve network congestion?

What technologies do Wi-Fi 6 use to solve network congestion?

However, there were very few wireless network devices more than 20 years ago, and no one would consider the problem of network congestion caused by competition for network access when the number of devices increased.

Arguably, since then, Wi-Fi has truly become the most common way to access the Internet in homes and businesses. The number of device models that support Wi-Fi has also risen exponentially.

Today, Wi-Fi devices are ubiquitous in our lives. Just open the wireless routing management interface at home, and there may be no less than 10 Wi-Fi devices online at the same time.

The increase in the number of devices has led to problems such as network congestion, performance degradation, and increased latency .

When designing Wi-Fi 6 (802.11ax), experts made improvements and innovations specifically for the problem of network congestion.

So, what new technologies does Wi-Fi 6 use to improve wireless channel capacity?

Friends who are familiar with Wi-Fi should know that the air interface of Wi-Fi adopts the modulation method of Orthogonal Frequency Division Multiplexing (OFDM) , that is, the entire bandwidth is composed of mutually orthogonal sub-carriers.

In Wi-Fi 6, the 802.11 working group introduced OFDMA access from LTE.

The addition of such an “A” character can be said to have brought a qualitative change to the network capacity.

As shown in the figure on the left below, Wi-Fi 5-based OFDM can only allocate all bandwidth in the channel to one user at any time period, even if the user’s data requirements do not need to occupy all the bandwidth.

When other users access the network, they need to wait for the next transmission opportunity window (TXOP) .

This is very inefficient in the use of channel resources, especially when the number of devices increases significantly.

▲ Figure 1 Comparison of OFDM and OFDMA

OFDMA changes that. OFDMA By forming subcarriers into resource units (RUs), the frequency channel can dynamically divide the instantaneous bandwidth to different users .

OFDMA suddenly increases the number of users that can be supported instantaneously.

Take the 20MHz bandwidth in the following figure as an example, after subcarrier allocation, 20MHz can support up to 9 devices to access simultaneously, 40MHz can support 18 devices, and so on.

▲ Figure 2 Number of resource units available at 20MHz with OFDMA

It can be said that OFDMA has brought qualitative changes to the capacity of Wi-Fi channels .

In the past Wi-Fi technology, inter-cell co-channel interference (CCI) is another important factor affecting channel capacity.

As mentioned in the previous article, the core of CSMA/CA is to use listen before talk (LBT), the device first monitors the wireless channel and sends data when it is not occupied .

In the case of multi-AP mesh networking (AP, Access Point, wireless access point), the devices in the cell will listen to the interference signal of the cell adjacent to the same channel, which will cause the device to mistakenly think that the wireless channel of the cell is currently active. is occupied, so stop sending.

This interference, when the network is not optimized or the number of available channels is low, can significantly reduce network capacity.

As shown in the figure below, four Wi-Fi APs use a three-channel network .

However, since there are only three available channels, AP1 and AP2 have to be deployed on the same channel Channel 6.

At this time, the signal of AP2 is interference to the user equipment belonging to AP1 – Overlapped Basic Service Set (OBSS, Overlapping basic service units can be understood as overlapping cells with the same frequency). 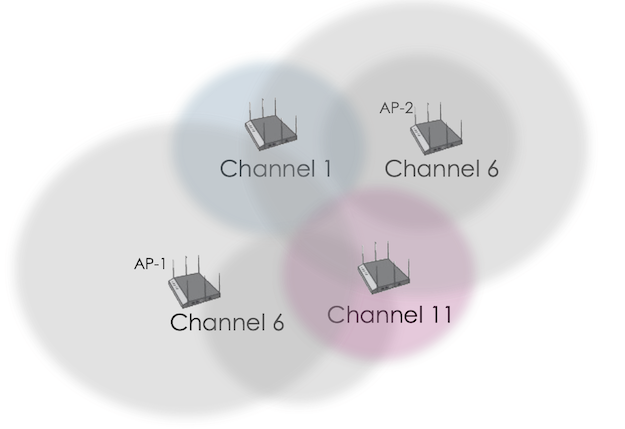 When the user equipment communicates with AP1, because the equipment receives the interference signal of AP2 on the same frequency, the user equipment will mistakenly think that the cell of AP1 is being occupied by other devices in the cell, so it waits for the next time period to send. As a result, network performance is degraded.

Not only multi-cell networking, this interference problem also occurs when Wi-Fi APs are very close.

For example, although there is only one wireless AP in your home, if the neighbor next door also has an AP deployed on the same channel as you, CCI will also lead to a decrease in the success rate of your device access.

Sadly, most manufacturers ship their devices with the default channel for the Wi-Fi AP on the first channel. In this case, the interference problem is even more serious.

If you find this kind of problem, you might as well change the channel of the Wi-Fi AP at home, which will significantly reduce interference and increase the network speed.

The solution of Wi-Fi 6 is to distinguish the local cell from the interfering cell by introducing the BSS Coloring (cell color coding) technology in the MAC layer.

That is to say, when working on the same channel, there are APs that interfere with each other, and different color codes will be attached to distinguish them .

When the user equipment receives the AP signal, it will compare whether the color it receives is consistent with the color of the currently associated AP.

Only when the colors are the same, the user considers the signal to be the signal in the cell.

As shown in the figure below, the channel 1 of the green cell is no longer interfered by the adjacent cell channel 1 (blue and red) due to the use of different color codes. 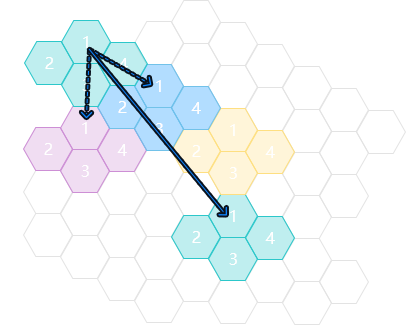 In the previous article, we said that in Wi-Fi, there are two detection thresholds, which are to detect signal power (SD) and channel energy (ED) respectively.

These two thresholds are fixed in the previous Wi-Fi technical standards and equipment, and cannot effectively distinguish the signal of the current cell or the signal of the neighboring cell (the left side of the figure below). 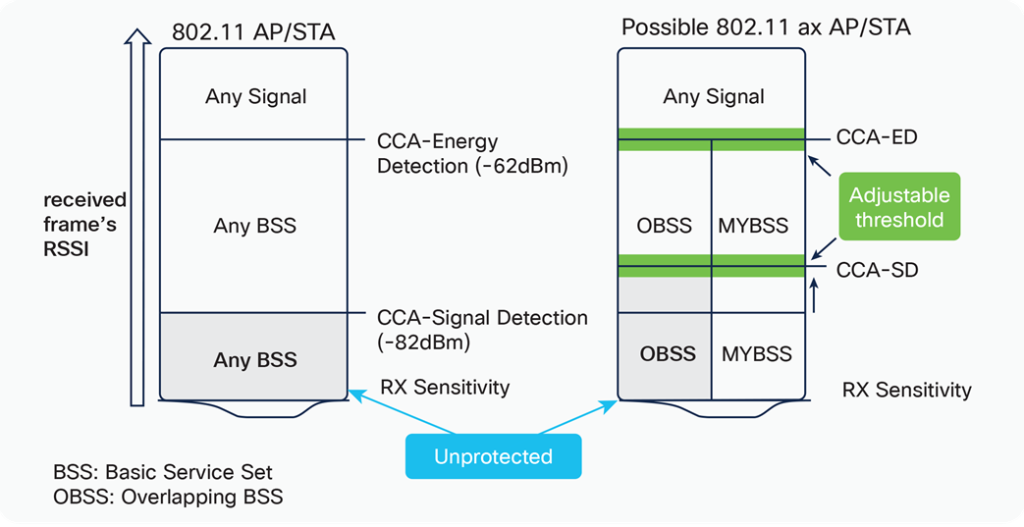 Usually, the signal strength of the interference signal in the surrounding cells will be low due to propagation attenuation, and will not exceed the detection threshold of relatively high amplitude.

The lower detection of the signal in this cell is helpful to improve the detection sensitivity.

Through this differentiated threshold detection, the channel will not be misjudged as being occupied, thereby improving the channel capacity.

The signal detection threshold can be dynamically adjusted with the network environment at the same time , which can be said to be an implementation form of a self-aware network.

Since the AP is not limited by size and power, it can have 4 or even 8 antennas.

An AP uses the same channel to serve multiple different users. Each user is allocated 1-2 antennas.

The signals between each antenna are orthogonal and mutually exclusive. interference. 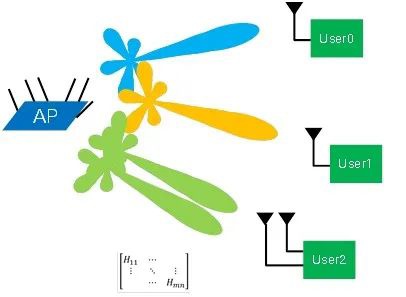 Although Wi-Fi 5 added downlink MU-MIMO in the standard update of wave 2, most manufacturers did not implement MU-MIMO function on the device.

In the era of Wi-Fi 6, MU-MIMO has finally been applied and extended to the uplink, that is, multiple terminal devices can not only receive at the same time, but also send data to the AP at the same time using the same channel.

With MU-MIMO and OFDMA, it is natural to think that if the AP can coordinate multiple users it serves to access the channel at the same time, instead of competing for requests one by one independently, the channel utilization will increase.

As shown in the figure below, the AP sends a trigger signal to synchronize the start and end times of the 4 users that need to be connected.

The four users no longer compete for channel resources with each other, but use MU-MIMO or OFDMA to communicate with the AP.

Wi-Fi 6, the most important update in Wi-Fi history.

Even the latest Wi-Fi 7 is only a few enhancements to the main features of Wi-Fi 6 .

There are many more updates to Wi-Fi 6, such as 1024QAM modulation, Target Wake Time, etc.

Today we only introduce features related to network capacity.

The increase in network capacity is the most useful feature in my opinion among the many updates of Wi-Fi 6, and it is also an important reason for enterprise and individual users to upgrade Wi-Fi networks and terminals.

In order to increase system capacity, Wi-Fi engineers have tried every means of physical layer and MAC layer. However, the final capacity is still limited by the Shannon limit.

To further fundamentally increase network capacity, it can only be solved from the perspective of increasing spectrum.

In particular, the existing 2.4GHz has become crowded due to the use of a large number of wireless devices such as Bluetooth and remote controls. And 5GHz, there are many access restrictions.

Spectrum resources become very limited for Wi-Fi systems . This led to the birth of Wi-Fi 6E.