What is the 100 trillionth digit of the decimal point of pi?

What is the 100 trillionth digit of the decimal point of pi? Google has the answer with Debian servers.

Presumably in the student days, when it comes to memorizing the number behind the decimal point of pi, many people’s desire to win or lose is quietly aroused, and the view that “the more you recite, the better” is also deeply rooted in our minds. middle.

As everyone knows, in mathematics and science, such a view still exists, but the competition at this time has already shifted from the human brain to cloud computing.

Recently, Emma Haruka lwao, a developer from Google Cloud, broke a new world record for calculating the value of π, which can calculate the value of π up to 100 trillion digits.

After verification, the decimal point value of the 100 trillionth is 0.

In response, the Google team posted a celebration saying, “Records are meant to be broken.”

How did Google figure out the 100 trillion pi decimal point?

Looking back at the competition in the industry on the decimal point value of π, it seems that it has entered a state of anxiety in recent years, and the time for breaking records is getting shorter and shorter.

In 2019, Google calculated pi to 31.4 trillion decimal places, setting a world record for that year.

In 2021, scientists at the Graubünden State University of Applied Sciences calculated a further 31.4 trillion constants, bringing the total to 62.8 trillion decimal places, a world record. 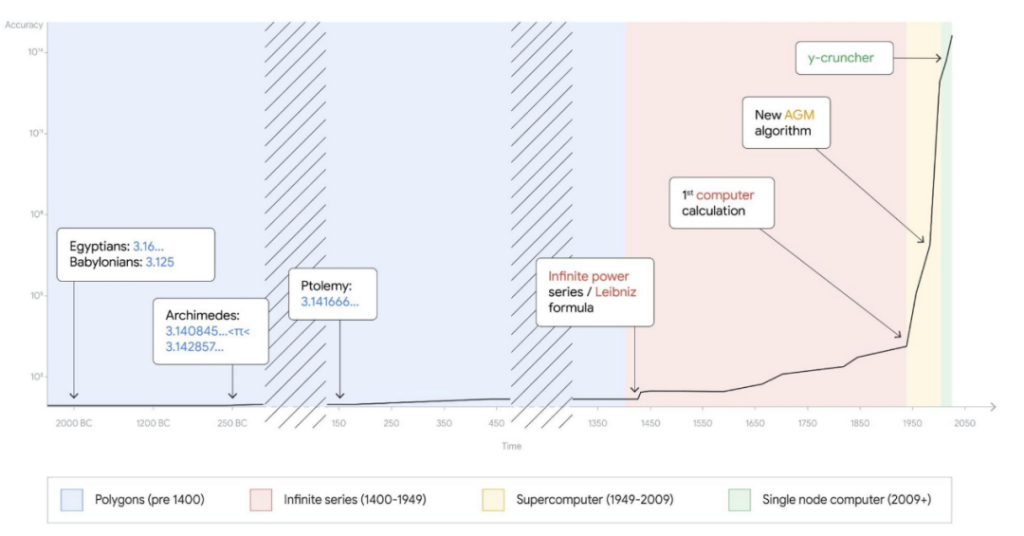 In March 2022, after Google used Google Cloud for the second time, it calculated 100 trillion digits after the decimal point.

When we took a deeper look at how Google calculated the 100 trillion pi decimal point, it revealed the technology behind it:

In addition, Google created a network storage cluster because the n2-highmem-128 provides 257TB of additional storage for a single virtual machine, and it estimates that the temporary storage required for computing requires at least 554TB.

The N2 machine series offers a well-balanced price/performance ratio with 32 Gbps of network bandwidth when configured with 16 vCPUs and the option to use the latest Intel Ice Lake CPU platform, making it a good choice for high-performance storage servers. 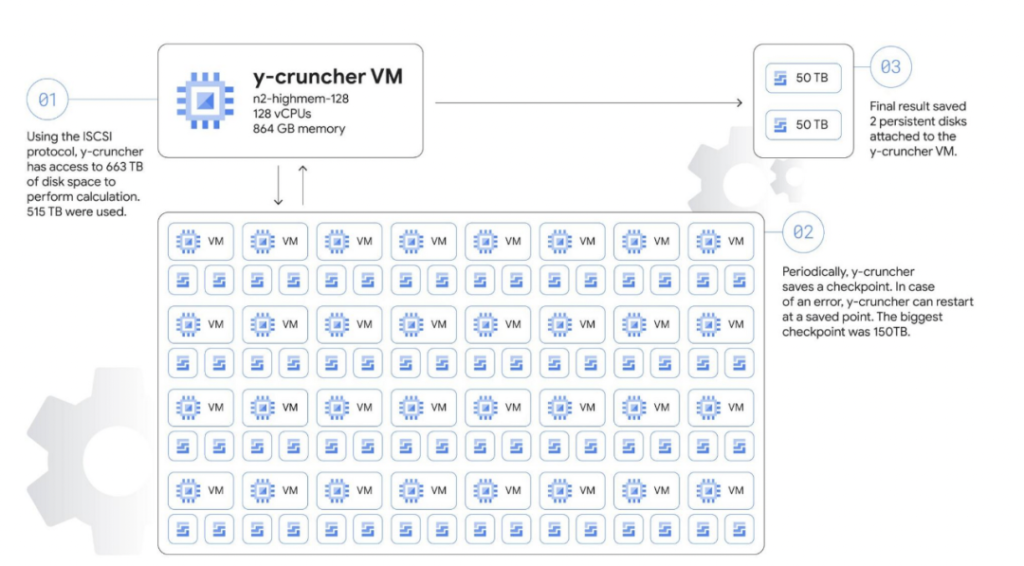 Through benchmarking, Emma Haruka lwao finally calculated that the first trillion digit of π was 0.

It has since been verified using another algorithm called the Bailey-Borwein-Plouffe formula.

Emma Haruka lwao said, “This validation was the scariest moment of the whole process, because five months after the calculation started, there was no sure way to know if the calculation was successful.

appily, the Bailey-Borwein-Plouffe formula found Our results are valid. Yay!”

Here are the last 100 digits of the result:

What’s the point of counting so many decimal points?

After verification, the result is undoubtedly proved to be correct. However, many netizens also questioned, what is the significance of calculating the value of π so much?

In this regard, the foreign media The Register also estimated the cost of Google’s project:

And these costs are all to calculate the 100 trillion values ​​in π.

However, in Google’s own view, it’s all worth it together.

In a blog post, Iwao noted, “This large-scale computation demonstrates how Google Cloud’s flexible infrastructure allows teams around the world to push the boundaries of scientific experimentation. It’s also an example of the reliability of our product — the program works without node failure. has been running for over five months and correctly handles every bit of 82 petabytes of disk I/O. Improvements in our infrastructure and products over the past three years have made this computation possible.”

In addition, Google also open sourced the script code of the automation solution used in this calculation on GitHub ( https://github.com/GoogleCloudPlatform/pi-delivery/tree/main/pi-100t ). Interested students may wish to learn more about it through the code.