The data provided by the Activity Monitor program in macOS to Apple Silicon users may not be as accurate, with a report claiming that the tool does not correctly distinguish the difference between performance and efficiency cores.

Activity Monitor provides a way for users and developers to tell them which applications are using the most resources and energy to perform tasks.

When testing the functional elements of the tool on Macs running Apple Silicon, it appears that a small error in core recognition could have hampered some of the results. 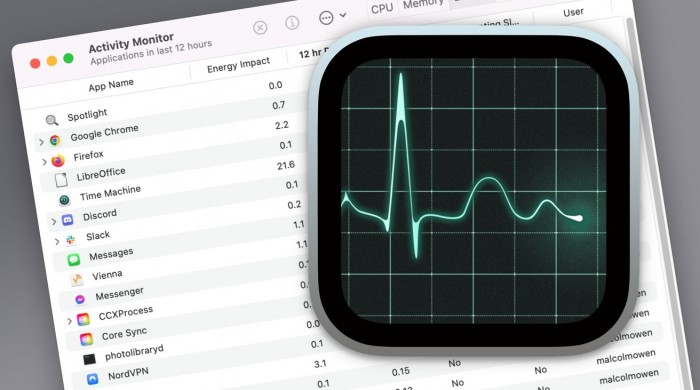 Since efficiency cores are designed to be slower than performance cores, but consume less power, this result is rather contradictory.

Testing by The Electric Light Company on a Mac Studio with an M1 Max involved running the test program on 8 performance cores and 2 efficiency cores.

With 8 floating-point computing threads per core type, each with 1 billion cycles, 8 performance threads complete the task in 6.6 seconds, while 2 efficiency cores take 40.4 seconds.

However, checking the energy tab of the Activity Monitor shows that the performance cores sustained energy values ​​of 800, 660 per thread, and a total of 5280 cells used.

On the face of it, this would infer that running these particular threads on efficiency cores turned out to be less efficient than performance cores.

The problem is caused by Activity Monitor, as it cannot distinguish between the same core with a fixed frequency and two different core types with a variable frequency, the report said.

It also has issues with how it reports load between cores, the report found.

It is thought that the results of different M1 chips are also inconsistent due to how macOS controls the frequency of the efficiency cores, so it is also possible that the way the M1 handles reports will be very different from the M1 Pro.

The report added: “Until Apple updated the numbers returned by Activity Monitor for the M1 chip, the confusion of core type and frequency made it not only useless, but actually misleading for comparing CPU usage or energy consumption. Instead, developers Tools such as Powermetrics should be considered as it provides information on cluster frequency and power usage, as well as active dwell time.”

It’s unclear if Apple has any plans to update the Activity Monitor, and it hasn’t seen any noticeable improvements in the time since Apple Silicon’s release.