Ubuntu 22.04 LTS changes NVIDIA driver defaults back to X.Org instead of Wayland

Ubuntu 22.04 LTS changes NVIDIA driver defaults back to X.Org instead of Wayland

While back in March Ubuntu 22.04 “Jammy Jellyfish” changed the default behavior of NVIDIA drivers to use Wayland, in line with Intel and Radeon graphics using GNOME Wayland sessions instead of X.Org over the past few releases, this change was withdrawn at the last minute.

With the release-day SRU, Ubuntu 22.04 LTS defaults to using a GNOME X.Org session instead of Wayland when running proprietary NVIDIA drivers. 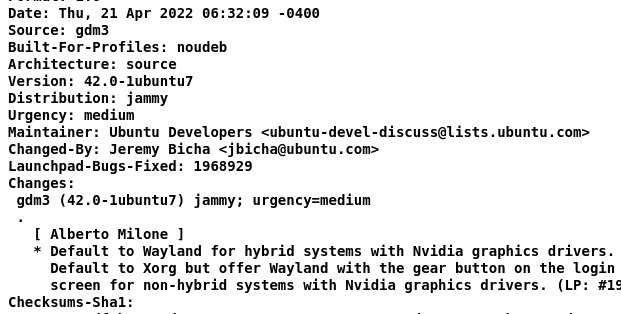 For the past year, when the GNOME desktop used Intel , Radeon, and other Mesa drivers, Ubuntu defaulted to a Wayland session.

Whereas the default for Ubuntu 21.04/21.10 with NVIDIA drivers is to stick to the X.Org session.

This is planned to change in Ubuntu 22.04 LTS, as NVIDIA’s proprietary drivers support GBM, and their Wayland support is generally better when using the latest version. So, last month, when the NVIDIA driver defaulted to Wayland.

But before the release of Ubuntu 22.04 this week, NVIDIA asked Ubuntu/Canonical to change the default to X.Org on systems with only NVIDIA graphics cards.

As a result, Ubuntu’s GNOME Display Manager (GDM) package was updated so that NVIDIA-only systems reverted to using the GNOME X.Org session by default.

The exception to this, though, is hybrid graphics systems, i.e. a mix of NVIDIA and Intel/ AMD GPUs, in which case Wayland will be the default as doing so is a better experience than X.Org.

But at least the GDM login screen option will remain to give Linux users with NVIDIA graphics cards the option to use a Wayland session if needed.

This GDM package was just uploaded on Thursday and is not part of the Ubuntu 22.04 LTS release image, but an initial update, so NVIDIA on Ubuntu 22.04 LTS is back to using the X.Org session by default.