TikTok has become the second most popular video app among under-35s in US.

According to research by Omdia, TikTok has surpassed Netflix as the second most popular video service for people under the age of 35 in the United States.

Only YouTube stood in the way for TikTok to take the top spot.

However, for those over 35, the app fell to sixth place, with even the BBC ahead of it.

In the U.K. and France, TikTok was fifth among the under-35s, but didn’t even appear in the top 10 among the over-35s.

“For broadcasters, commercial companies or other companies keen to reach younger audiences, the growing importance of TikTok in reaching and developing new audiences should not be underestimated.”

In addition to overtaking Netflix, there has also been a huge jump in the amount of time people spend on the TikTok app.

In 2021, the average time spent on the app rose from 6.4 minutes to 18.1 minutes. In 2021, Facebook leads the way in terms of average watch time, recording an average of 18.7 minutes across the nine countries surveyed.

Omdia said that TikTok may surpass Facebook in 2022, but the latter also has enough ability to fight back. 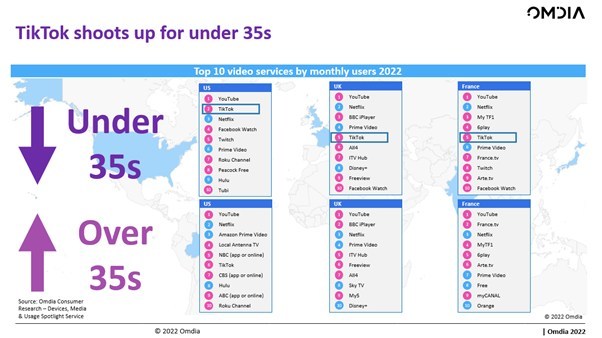 Facebook launched Reels globally in February 2022, which are short video content that appears in people’s Feeds. It hopes these Reels will stop the exodus of younger users, many of whom have switched to TikTok content.