The PCIe 7.0 standard is still being revised with speeds up to 512GB/s, but the road to full popularity is long!

The PCIe 7.0 standard is still being revised with speeds up to 512GB/s, but the road is long!

PCIe 5.0 was proposed in 2019 after a few years before it officially entered the consumer market in the second half of this year, and PCIe 7.0 announced at the end of last month has a longer road to popularization.

Silicon Motion, a major manufacturer of SSD main control chips, said that the original PCIe 7.0 standard will be completed in 2025, and the full popularization may take around 2028.

Interestingly, the PCIe 6.0 specification is not out of date and was just announced at the beginning of this year. 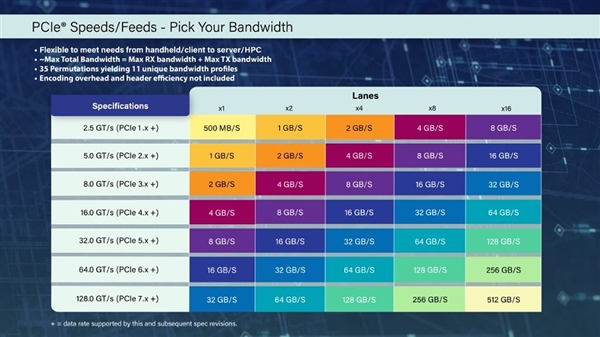 Similar to the changes of these generations, PCIe 7.0 achieves a bandwidth increase of 128GT/s on the basis of PCIe 6.0, and the x16 channel can reach 512GB/s in both directions.

Even for the x2/x4 channels that SSDs often use, the theoretical peak speeds are increased to 64GB/s and 128GB/s respectively, and the imagination is infinite.

It is worth mentioning that PCIe 7.0 still maintains backward compatibility .

The PCI SIG organization said that the next draft will focus on optimizing channel parameters and improving energy efficiency levels.