The NTFS driver of the Linux kernel has not been updated for nearly half a year, and it may become an “orphan project”.

In 2020, filesystem driver developer Paragon Software said they wanted to merge their NTFS driver upstream into the Linux kernel.

This driver was previously a proprietary commercial product of the company, but given the state of support for the NTFS filesystem in the Linux kernel at the time, they wanted to merge this driver upstream to provide full read/write support and existing NTFS drivers Other features not in the program.

Finally after several rounds of review last year, the new driver was merged into Linux 5.15 .

Less than a year later, however, there were concerns that the driver would become an “orphaned project” unmaintained.

When Paragon Software submits the NTFS3 driver upstream, it promises to maintain it in the future.

But the driver hasn’t had a major update since it was merged into the Linux 5.5 kernel last year, and there’s even a backlog of uncommitted fixes.

Kari Argillander, the developer who contributed a lot of patches to the project, recently expressed his concerns about the state of the drive. Kari said he was unable to get any response from Paragon Software maintainers.

Some developers said that the maintainer living in Russia may be an important reason for all this.

Kari has now raised these concerns on the kernel mailing list, summarizing the current situation. He suggested classifying the driver as “orphaned” and proposed co-maintaining the driver, but has yet to receive any response from the maintainers.

Therefore, it is now necessary to determine whether the driver should be removed from the mainline, or what action should be taken to bring the driver into maintenance. 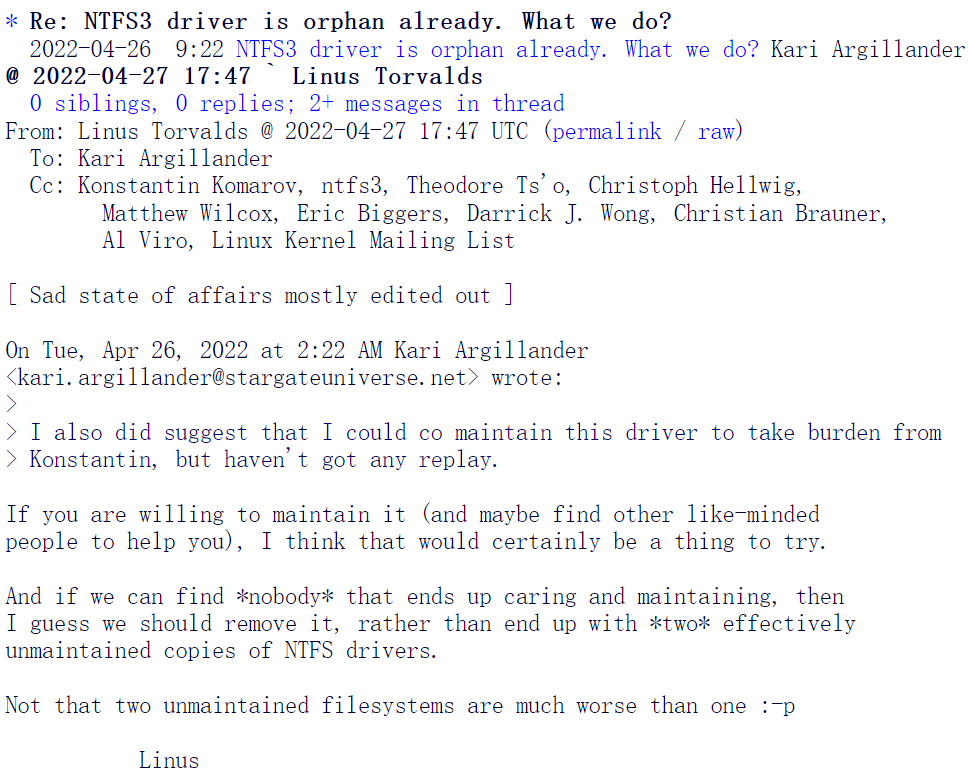 Judging by the commit log of the repo, it’s true that the NTFS3 filesystem driver hasn’t undergone major changes since it was merged into Linux 5.15 last year.

Paragon’s devel branch was last committed in October and November last year, and no patches have been submitted upstream since then. Therefore, the current situation is not optimistic for this once promising NTFS driver, and I hope that there will be a turnaround in the future.