The father of Node.js talks about JavaScript containers

The father of Node.js talks about JavaScript containers

Node.js and Deno founder Ryan Dahl’s “JavaScript Containers” article published yesterday proposes a vision: In the future, new container-like abstractions will emerge to simplify servers, and most web services can be simplified by JavaScript containers instead of Linux containers . In this emerging server abstraction layer, JavaScript replaces the Shell. 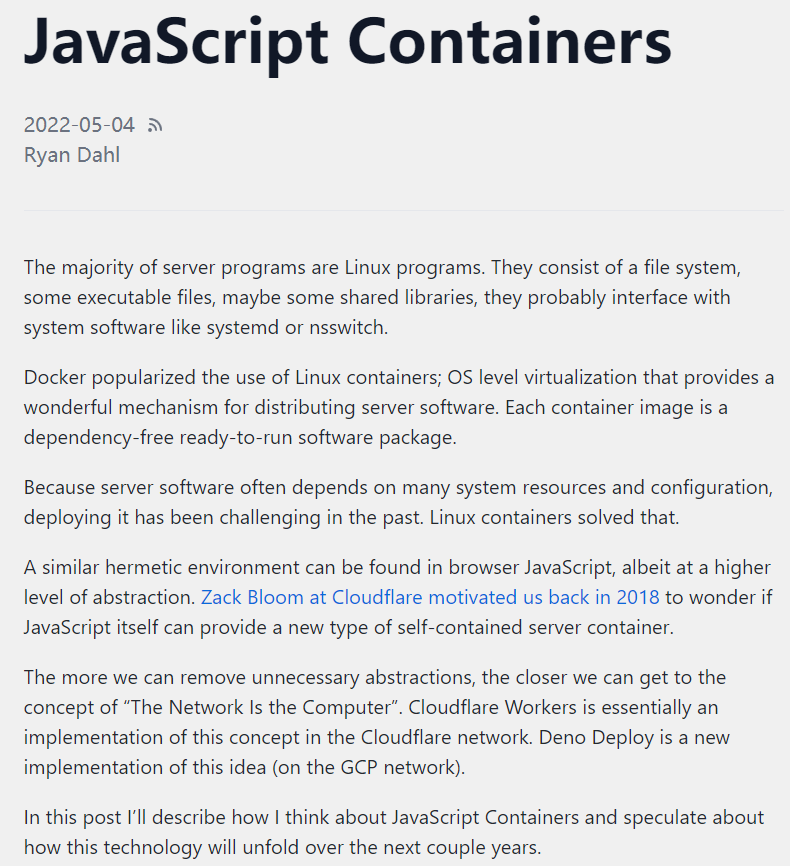 RD believes that the kind of container he proposes is not designed to solve the same broad problems that Linux containers address.

It minimizes the boilerplate of the business logic of the web service and reduces the concepts that the programmer needs to know (eg: when writing a web service, it is very likely that any systemd configuration is just unnecessary boilerplate).

Shell is an interpreted scripting language for invoking Unix programs. It can write conditional statements, loops, it has variables… but unfortunately it has limited capabilities and is difficult to program.

In a JavaScript container, the JavaScript sandbox can call Wasm instead of calling Linux executables like a shell.

Finally, the RD said that he is not saying that Linux containers are going away, because of course this level of abstraction has its value.

But it’s pretty low-level for most of the “business logic” that developers write. When developers build websites, things like systemd configuration are boilerplate.

Therefore, most web services can be simplified with JavaScript containers instead of Linux containers. They are exploring these ideas in Deno, trying to radically simplify the server abstraction.

The Deno team released the first beta version of Deno Deploy last year , a modern serverless cloud built by the Deno team from the ground up that users can use to deploy JavaScript, TypeScript and WASM services to data centers around the world very quickly.