Sysinternals Author : It’s time to retire C/C++ for new projects and use Rust

Sysinternals Author : It’s time to retire C/C++ for new projects and use Rust.

Microsoft Azure CTO, the main developer of Sysinternals, Mark Russinovich, posted on his social account that it is time for developers to stop using C/C++ to start new projects, and suggested that Rust can be used in scenarios that require the use of non-GC languages.

“Speaking of languages, it’s time to stop starting any new projects in C/C++ and use Rust in those scenarios that require non-GC languages. The industry should announce deprecation of these languages ​​for safety and reliability.” 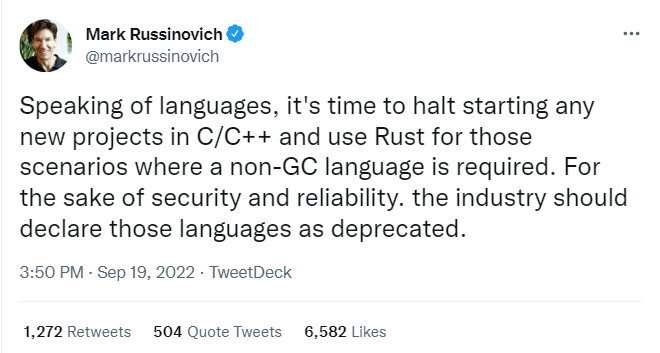 As soon as this remark came out, it inevitably caused widespread discussion.

Someone asked if this was his personal opinion or a statement as a CTO.

.NET Foundation member Shawn Wildermuth asked in the comments , does Rust have enough developers to push the work forward? In response, a developer replied, “It’s really hard to give up C/C++, but it doesn’t matter; young developers can master Rust quickly, compared to trying to find talented C/C++ developers. It’s much easier to lift.”

There are also comments that:

George Ou : I’m a huge Rust fan, but what would you say to those who think there are safe versions of C and C++?

Ted Mielczarek : Either they’re lying to you, or what they’re suggesting requires effectively rewriting your entire codebase, so you’re better off using Rust.

Among the dissenting voices, a user with the ID  ionCube24  said that Mark Russinovich meant to blame the language more than the programmer. But the truth is “C++ is great, it’s just that a lot of people who use it (and other languages) basically don’t know how to program; switching languages ​​won’t fix that.”

Some people use their own practice as an example to show that Rust has limitations and does not solve all his problems. However, the netizen’s argument seems a bit untenable:

“It doesn’t have to solve all the problems to have a big impact.”

Others lamented that  Mark Russinovich had changed and was no longer “cool”. There are also relatively sane claims , “Or better yet: stop hyping one programming language. Different tools are suitable for different problems. Rust is great, but it’s not a solution to all programming problems”.

Some even come up with what they think is a better alternative to C/C++, “When the GCed system language is acceptable, there will be no new C/C++ projects. Go, Nim and Crystal are all better than C/C++. Good choice. And Zig, which is doing some cool stuff, but isn’t as mature or popular as Rust.”

Currently, there are also related discussions on Hacker News  and  Reddit .