Starlink may be terminated in future due to high disputes on 12GHz Frequency.

SpaceX’s Starlink satellite internet service may struggle to get exclusive access to the 12GHz wireless band due to strong opposition from rival Dish Network.

In order to avoid heavy damage to its long-term efforts, SpaceX has frequently given defense opinions, especially if it may cause the normal development of Starlink communication.

In addition, some Starlink customers recently received an email from SpaceX, hoping they could help petition U.S. Congressmen and authorities such as the Federal Communications Commission (FCC). SpaceX wrote in bold in the letter: “Today, we implore you to help end this lobbying campaign initiated by Dish Network, otherwise the vast majority of US Starlink customers, including you, will not be able to continue to use Starlink satellite Internet services smoothly.”

Media pointed out that the two companies are bickering over a series of 12GHz radio spectrum, which SpaceX hopes to use these frequency bands to operate the huge Starlink network – which currently contains more than 2,400 satellites and is still growing.

Last January, the FCC opened the door to the 12GHz band, and Dish and RS Access also submitted a study to the agency on how these services could be leveraged for terrestrial 5G services.

SpaceX, on the other hand, said in an FCC filing last week that the company relies primarily on the 12GHz band to provide critical downlink services to Starlink customers across the United States. 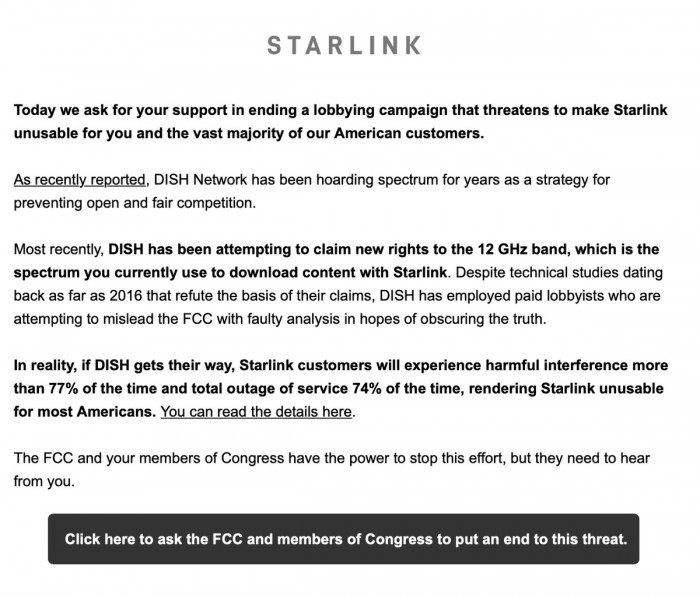 SpaceX claims that if 5G usage based on the 12GHz band is opened up to third parties, the company’s customers will experience a 74 percent complete service outage.

The wording of the email sent to customers this week is also consistent with the one sent to media representatives last week.

The company pointed out that Dish lobbied money to try and mislead the FCC with a false analysis to cover up the truth.

In addition, in order to facilitate users to send petition documents to the FCC, SpaceX has provided a link directly to the relevant webpage.

Starlink may be terminated in future due to high disputes on 12GHz Frequency.