If a person gets lost in the wild, they have two options. They can look for civilizations, or they can make themselves easy to spot by making a fire or writing HELP in capital letters.

The choice is the same for scientists interested in the question of whether intelligent aliens exist.

For more than 70 years, astronomers have been scanning radio or optical signals from other civilizations in search of extraterrestrial intelligence, or SETI.

Most scientists believe that life exists in many of the galaxy’s 300 million potentially habitable worlds. Astronomers also believe that some life forms have a considerable chance of developing intelligence and technology. But no signal from another civilization was ever detected, a mystery known as the “Great Silence.”

While SETI has long been part of mainstream science, METI, or extraterrestrial intelligence information, is less common.

Scientists believe there are 300 million habitable planets in the Milky Way, some of which could be home to intelligent life.

In the coming months, two groups of astronomers will send messages into space in an attempt to communicate with any intelligent aliens that might be listening outside.

These efforts are like starting a big bonfire in the woods, hoping someone will find you. But some have questioned the wisdom of doing so. 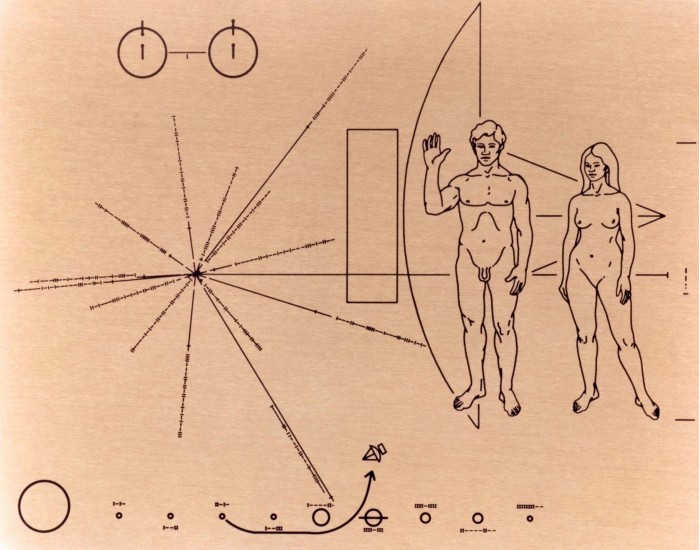 The Pioneer 10 spacecraft carried this plaque, which described some basic information about people and Earth.

Early attempts to reach life beyond Earth were akin to releasing a drift bottle. In 1972, NASA launched the “Pioneer 10” spacecraft to Jupiter, which carried a sign with a line drawing of a man and a woman and symbols to show where the spacecraft originated.

In 1977, NASA attached the famous gold drawing board to the Voyager 1 spacecraft. Those spacecraft — and their twins, Pioneer 11 and Voyager 2 — have now left the solar system.

But in the vast expanse of space, the odds of these or any other physical objects being found are very small.

However, electromagnetic radiation is a more effective beacon.

Astronomers sent the first radio message designed for alien ears in 1974 from the Arecibo Observatory in Puerto Rico.

This series of 1s and 0s was designed to convey simple information about humans and biology, and was sent in the direction of the globular cluster M13.

Since M13 is 25,000 light-years away, it is clear that our generation will not have to wait for their reply.

In addition to these purposeful attempts to send messages to aliens, stray signals from television and radio broadcasts have been leaking into space for nearly a century.

This expanding bubble of Earth’s “gibberish” has reached millions of stars.

But there’s a big difference between a concentrated explosion of radio waves from a giant telescope and a diffuse leak — the faint signal from Earth’s TV show dies in the hum of radiation left by the Big Bang shortly after leaving the solar system. 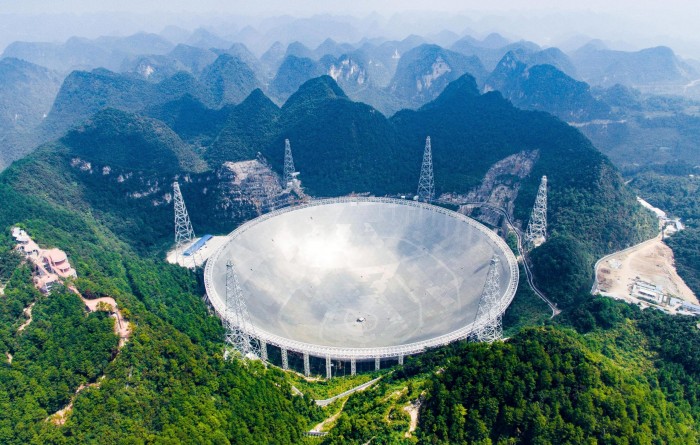 China’s new Five-hundred-meter Aperture Spherical Radio Telescope (FAST), the largest ever radio telescope, will be used to send information to the center of the Milky Way.

Nearly half a century after the Arecibo message, two international teams of astronomers are planning a new attempt at alien communication.

One group is using a huge new radio telescope, another group is selecting a dramatic new target.

One of the new messages will come sometime in 2023 from the world’s largest radio telescope in China. With a diameter of 1,640 feet (500 meters), the telescope will fire a series of radio pulses across the vast sky. These switching pulses are like the ones and zeros of digital information.

The information, dubbed “a beacon in the galaxy,” includes prime numbers and mathematical operators, the biochemistry of life, the human form, the location of Earth and a timestamp.

The team is sending information to a cluster of millions of stars near the center of the Milky Way, some 10,000 to 20,000 light-years from Earth. While this maximizes the number of potential aliens, it means it will take tens of thousands of years before Earth can possibly get an answer.

Another attempt to target only one star, but with the potential to get a quicker response. On October 4, 2022, a team from the Goonhilly satellite ground station in the UK will transmit information to the TRAPPIST-1 satellite.

The star has seven planets, three of which are terrestrial worlds located in the so-called “golden zone” — meaning they may also host water and potentially be home to life.

TRAPPIST-1 is only 39 light-years away, so it may only take 78 years for intelligent life to receive the message, and Earth to get a reply.

The center of the Milky Way may be home to intelligent life, but some researchers think connecting with aliens is a bad idea.

The prospect of contact with aliens is fraught with ethical questions, and METI is no exception. The first question is.

Who speaks for the earth? Without any international consultation with the public, the decision about what information to send and where to send it rests with a small group of interested scientists.

But there is a deeper problem. If you get lost in the forest, it’s obviously a good thing to be found. When it comes to whether humans should broadcast information to aliens, the answer is less clear.

Before his death, iconic physicist Stephen Hawking was outspoken about the dangers of making contact with aliens with superior technology. He believes that they may be malicious and, if given the Earth’s position, could destroy humanity.

Others see no additional risk because a truly advanced civilization already knows of our existence. And there are people who are interested. Russian-Israeli billionaire Yuri Milner has offered $1 million for the optimal design and efficient transmission of new information.

To date, METI has not been regulated by any international regulations, so despite concerns, experiments will continue.

So far, intelligent aliens are still in the realm of science fiction. Books such as Liu Cixin’s “Three-Body Problem” offer somber and thought-provoking perspectives on what a successful METI effort might look like.

In the books, humanity doesn’t end well. If humans do make contact in real life, hopefully the aliens will arrive peacefully.