As the release time approaches, AMD and NVIDIA’s next-generation graphics cards not only have more and more specifications exposed, but also their performance is gradually becoming clearer.

According to Greymon55, AMD’s next-generation big-core Navi 31 (corresponding to RX 7900 XT without incident) is expected to have 92TFlops FP32 floating-point computing performance, which is 28% higher than the previously reported 75TFlops, and compared to the current big-core Navi 21 (RX 6900 XT) ) is almost tripled.

Greymon55 revealed before that AMD expected to adjust the specifications and performance of Navi 31, but did not expect such a big change.

If it is 60 groups of WGP (workgroup processors) and 15360 stream processors, in order to achieve the computing performance of 92TFlops FP32, the core frequency must be as high as 2995MHz . Of course, there is a high probability that a series of different 32-bit instruction sets will be introduced to obtain more High floating point performance.

According to @Kepler_L2, AMDGPU driver information shows that the RDNA3 architecture will still retain the traditional CU computing unit structure without canceling it.

Of course, floating-point performance and gaming performance cannot be equated, and it remains to be seen which is actually better, but it also reflects a fair share of GPU performance. It looks like this is another very tough competition. 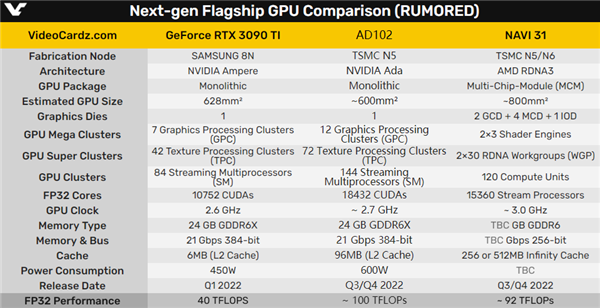