After completing the specification work for PCIe 6.0, the PCI-SIG announced new plans for PCI Express 7.0 on Tuesday.

If all goes well, the new norm will be officially rolled out in 2025.

Although PCIe 5.0 is still in the popular stage, the future PCIe 7.0 can support interface configurations of 128 GT/s @ x16 and bidirectional transfers of up to 512 GB/s. 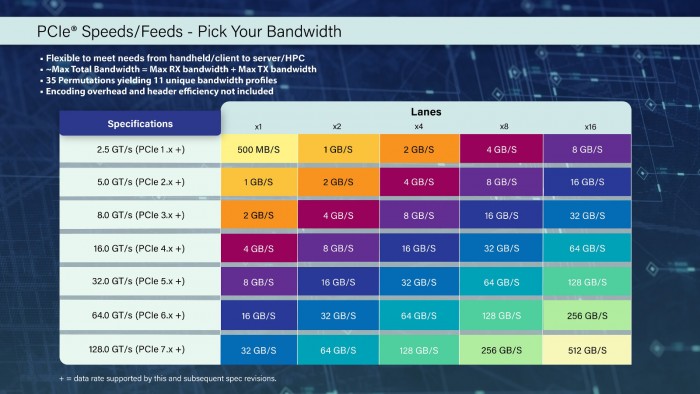 The following are the key features of the PCIe 7.0 specification:

● Compatible with all previous PCIe versions Nathan Brookwood, researcher at Insight 64, said: “The PCI-SIG clock has been built with this in mind for 30 years.

An early parallel version of PCI technology, with transfer rates in the hundreds of MB/s, which matched the graphics, storage, and networking needs of the 1990s.

In 2003, the PCI-SIG pushed the transition to serial designs supporting thousands of MB/s (multiple GB/s) to accommodate higher-speed solid-state disks and Ethernet connections.

After winding up, the PCI-SIG doubles the PCIe specification bandwidth almost every three years to proactively address the challenges of emerging applications and markets.

Today’s newly announced PCIe 7.0 doubles the lane speed to 512 GB/s in both directions, continuing the goal of doubling the performance of the PCIe specification in another three-year cycle.