Reddit netizen CHDuckie posted on the NVIDIA subreddit that he found an unusual “large file” in the NVIDIA CUDA folder on his hard drive.

Compared with other codes that are less than 10 KB, the size of the document is as high as 3212 KB.

CHDuckie was retrieving his hard drive at the time when he stumbled across this “easter egg” txt file containing the full text of “War and Peace”. Out of curiosity, he opened the file with VS Code. After all, the txt file is absurdly large for a regular notepad (notepad.exe) application.

Results In this 65340-line document, the first thing that catches the eye is – Leo Tolstoy’s Project Gutenberg, “War and Peace” eBook.

Although it makes people feel a little puzzled, some netizens have given a relatively reasonable explanation.

It is reported that NVIDIA CUDA as a computing platform and programming model, developers can carry out a series of general-purpose accelerated computing on the company’s GPU.

Then Jlouis8 posted a code example ( portal ) on GitHub in the comments, demonstrating how to create a small CUDA kernel to calculate w, x in some data (such as the War and Peace e-book) , y, and z number of letters. 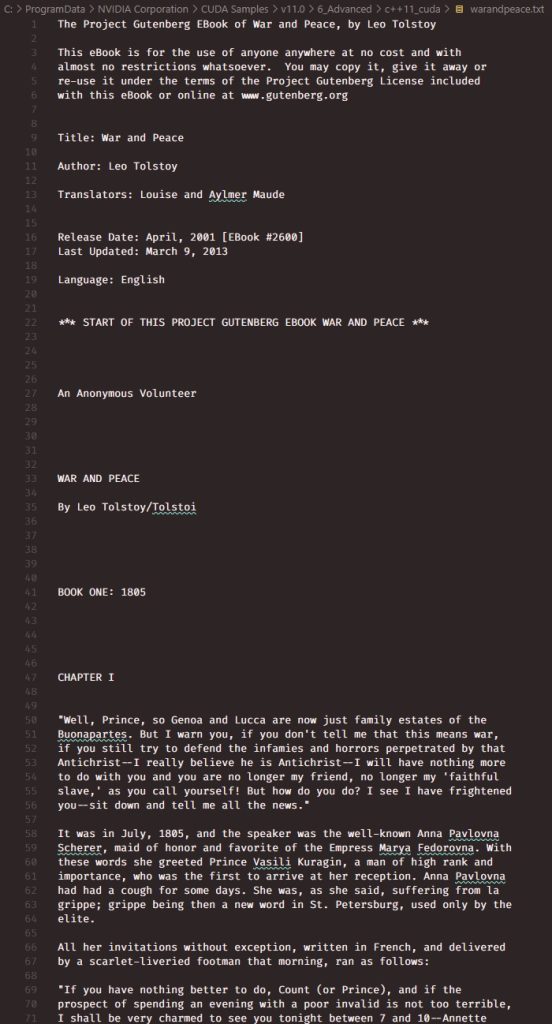 It’s not hard to understand why I chose this ebook.

First, NVIDIA is free to include without infringing copyright; second, the amount of raw text is large enough but fast enough to be done quickly on CUDA (GPU) hardware.