MSI announced the launch of the last member of its Z690 platform: MEG Z690 GODLIKE.

The release of Intel’s 12th Gen Core processors has attracted a lot of attention, and MSI has previously released a number of motherboards for the Alder Lake platform targeting different market segments, but the best motherboards are not arriving until today.

This was also the only one of all MSI winning products that was not announced at the time. 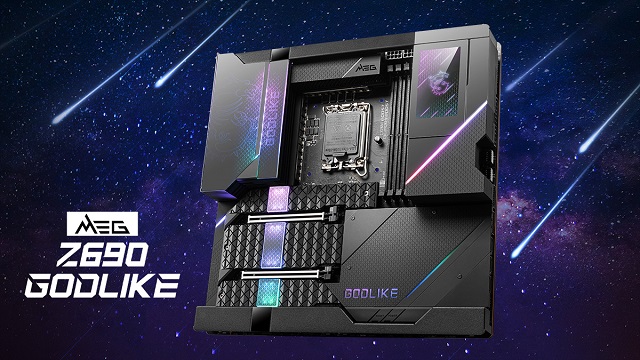 Featuring all of MSI’s top motherboard technology, MEG Z690 GODLIKE is clearly aimed at those avid enthusiasts who build top-of-the-line exceptional systems for the best performance and experience.

MSI said that whether you want to set an overclocking record, or want to make special customization through the touch screen, or create a unique ARGB lighting effect, or even just want to have the most powerful system, MEG Z690 GODLIKE can meet the needs.

MEG Z690 GODLIKE provides a very rich function, the most striking is the integration of a M-Vision touch screen, the size of 3.5 inches, connected through the USB Type-C port, also has an easy-to-detach magnetic design, which is the industry’s first Motherboard with built-in touch screen.

Users can place this touch screen where they want, and it will provide some host information and functions, such as temperature, frequency, shutdown/restart, etc., and can also use dedicated MSI software to customize the display.

In addition, the touch function enables system operation and fine-tuning of PC settings. It is a very handy tool for overclocking enthusiasts or computer enthusiasts.

MEG Z690 GODLIKE adopts a top-level power supply scheme, equipped with a 20+2-phase power supply module, an 8-layer server-grade PCB with 2 ounces of copper, and exclusive technology, which can push the performance of the latest CPU to the limit.

The motherboard is covered with a dark all-aluminum cooling solution, with a triangular mesh texture on it, and the luminous dragon nebula with tempered glass echoes with the RGB lighting effects, showing a different visual effect.

MSI said that the MEG Z690 GODLIKE is equipped with multiple patent-pending cooling solutions that can help gamers enjoy the most extreme performance at the lowest operating temperature.

MEG Z690 GODLIKE has four DDR5 memory slots, supports a maximum capacity of 128GB, and the frequency can reach 6666 MHz or above.

The dual 8Pin external power supply ports on the motherboard are adjacent to the memory position, which is convenient for cable management.

In overseas markets, MSI will give priority to users who have purchased the previous generation of GODLIKE motherboards or MSI GeForce RTX 3080/3090 series graphics cards as a token of appreciation, with a price of $2,099.

It is not yet clear when the MEG Z690 GODLIKE will be released in China, as well as the price. 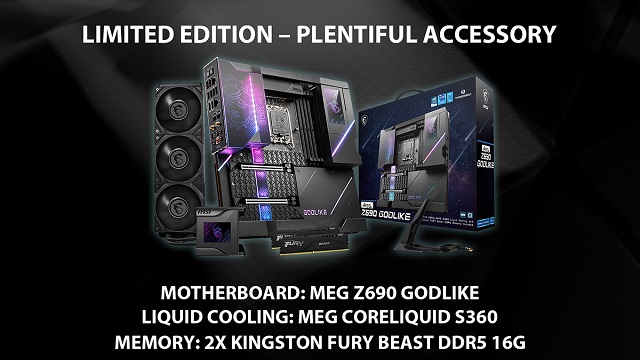