Linux 5.19 gets nearly half a million lines of new graphics driver code

Linux 5.19 gets nearly half a million lines of new graphics driver code.

David Airlie has sent an update to the Direct Rendering Manager (DRM) subsystem for the Linux 5.19 merged window.

The DRM graphics driver update for Linux 5.19 includes full driver support for the latest graphics cards from AMD and Intel, so the amount of code is a bit unexpected: the changes consist of 1302 files, 495,793 new lines of code, and 32,019 deleted lines of code.

AMD is preparing for the next generation of CDNA Instinct products and RDNA3 Radeon RX 7000 series graphics cards.

A large DRM pull request for Linux 5.19 was posted on LKML , and Linus Torvalds has pulled the DRM code and responded: 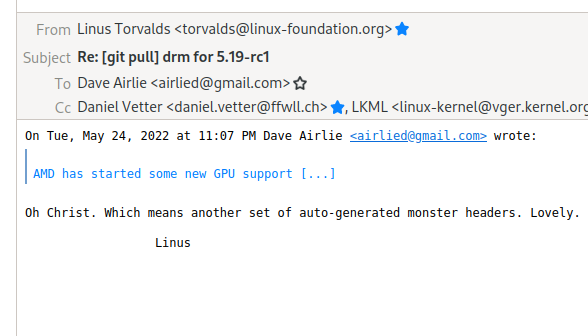