Intel Arc A series desktops have always been the only one such as the Arc A380, and at the end of the third quarter, the army finally expanded.

Last night, Intel CEO Pat Kissinger announced that the price of its flagship discrete graphics card, the Arc A770, starts at $329 and will be released on October 12.

On Sep 28, Intel finally officially released four new graphics cards, including the flagship Arc A770 16GB, Arc A770 8GB, the high-end Arc A750, and the entry-level Arc A310 – and then wait for the mainstream Arc A580 to gather a family. 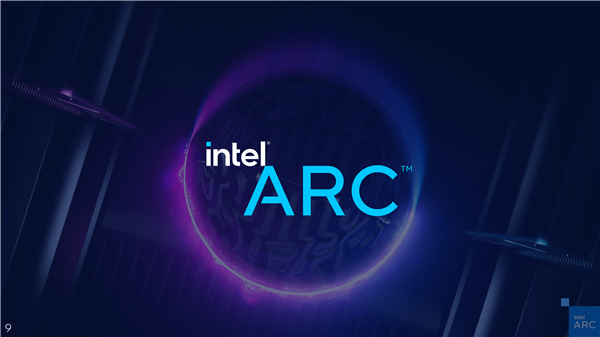 Arc A770 16GB/8GB only has different video memory capacity, the others remain the same, and the manufacturer decides how much the non-public version uses.

Arc A750 is simplified to 32 Xe cores, 32 optical tracking units, the average core frequency is 2050MHz , the video memory bit width and frequency, system bus, and power consumption are the same as above. 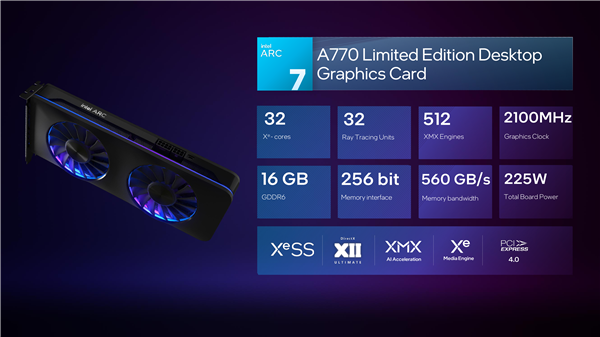 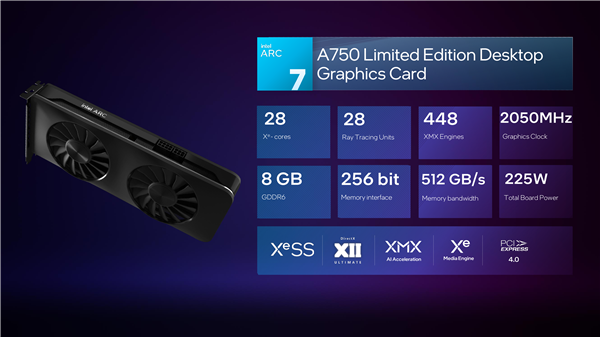 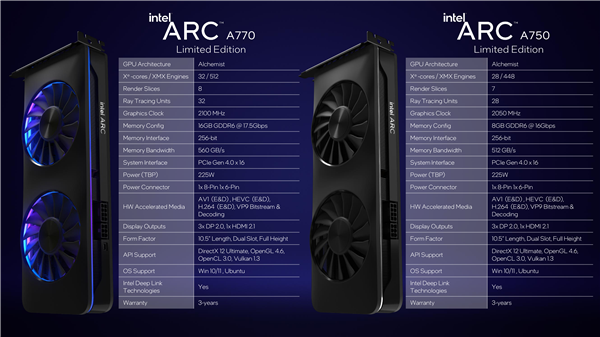 The official performance reference is that they can run 3A masterpieces smoothly at 2K resolution and high image quality , and the performance difference between the two varies from 10-20% in different games. 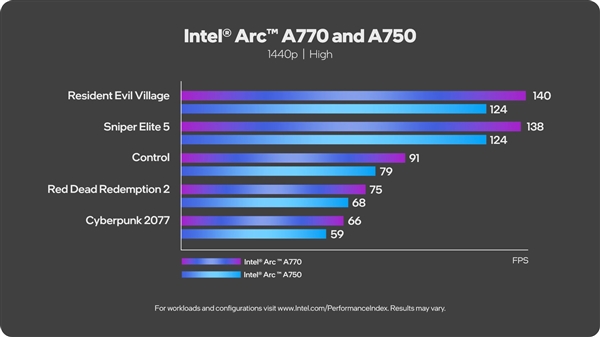 Both of them are competing against the RTX 3060.

According to official data, the Arc A770 can take the lead in most games when ray tracing is turned on, and turning on the XeSS super-resolution technology can bring about a substantial performance improvement, up to doubling. 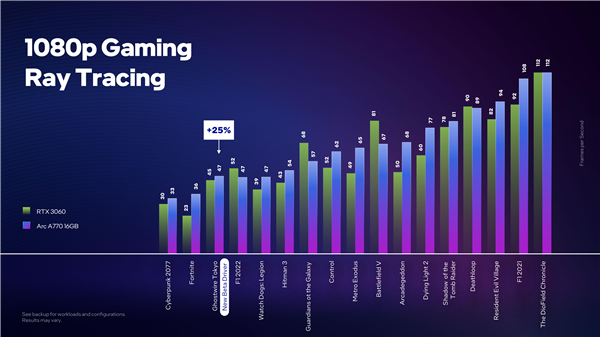 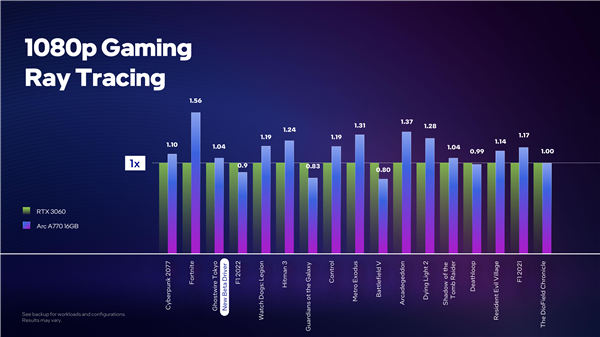 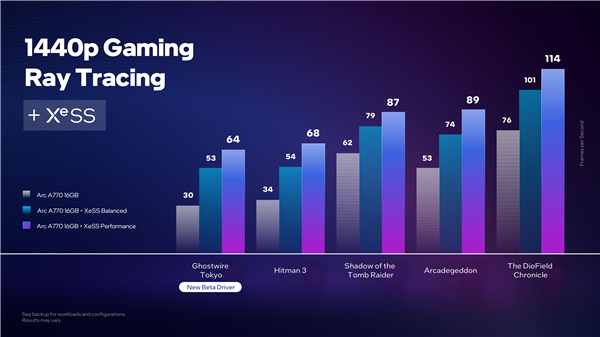 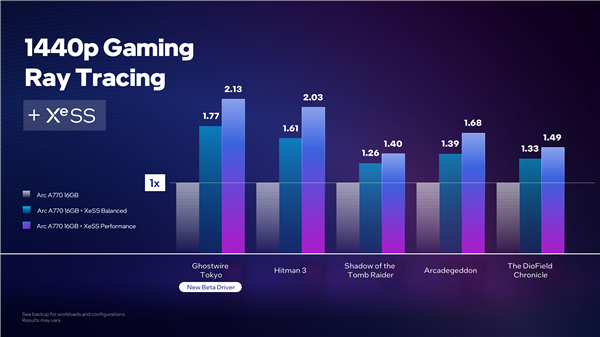 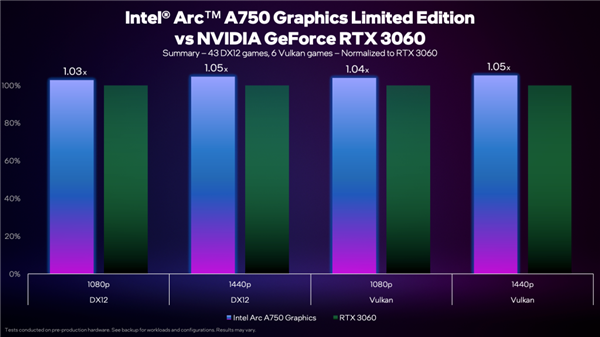 The specifications of the Arc A310 are very ugly.

There are only 6 Xe cores (equivalent to 96 execution units), 6 optical tracking units, the core frequency is 2000MHz, the video memory is only 64-bit 4GB GDDR6, and the equivalent frequency is 15.5GHz.

The bandwidth is only 14.4GB/s, the power consumption of the whole card is 75W , and no external power supply is required.

The official said that it can handle medium-pressure online games and 3A games in 1080p medium quality.

But you must know that the 12th-generation Core Duo display already has up to 96 units.

It is also the Xe architecture, but it is a low-power version of Xe LP. AMD has achieved 12 RDNA2 units. 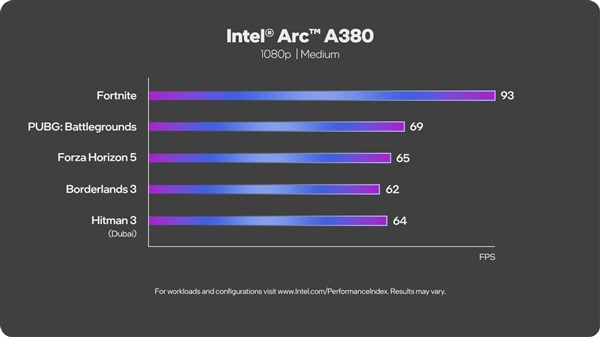 In addition, the basic specifications of Arc A580 have also been revealed before, 24 cores, core frequency 1700MHz, 8GB GDDR6 video memory, and the whole card power consumption is 175W. 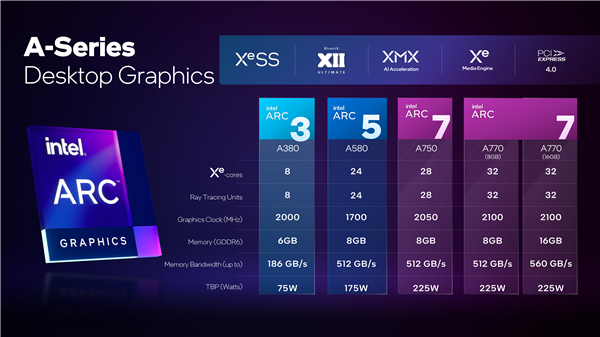 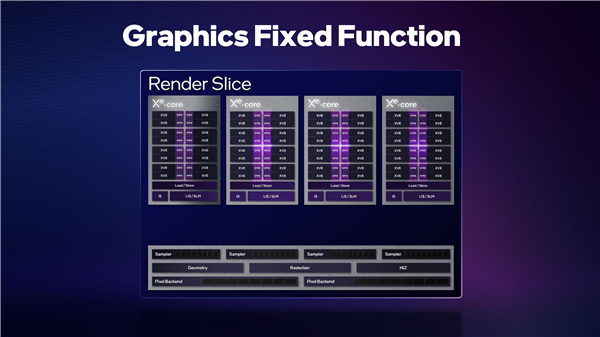 Intel has officially designed limited editions of the Arc A770 and A750 this time, which are equivalent to the public versions . The difference is that the former has four-zone RGB lighting effects in blue-purple tones and integrates 90 customizable RGB LED lamp beads.

The fan noise is only 39 decibels at a distance of 50 cm, and it can be reduced to 35 decibels if you use an open case, which is not as loud as whispering.

The partners of Intel Arc graphics card include Acer, ASUS, Gigabyte, Lanji, HP, MSI, Climbing, Jingtian, Ningmei, Minglongtang, etc. Non-public cards and complete machines will be launched one after another. 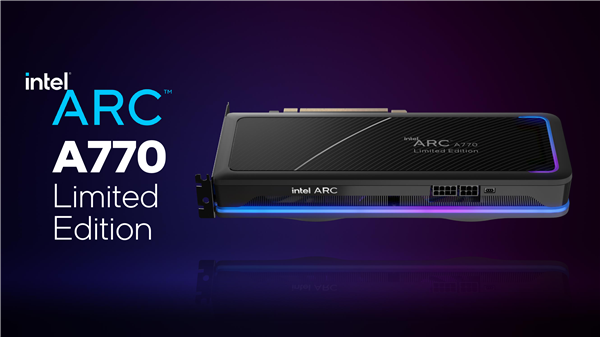 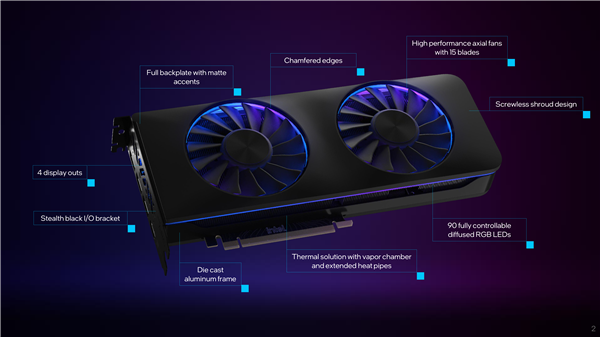