Intel launched the Arc A380 graphics card  a few days ago.

It not only supports light pursuit, but also has a game magic skill.

It is XeSS, similar to NVIDIA’s DLSS technology or AMD’s FSR technology.

XeSS is an AI-based oversampling technology.

Another advantage of XeSS is that it does not rely on a dedicated acceleration unit. In theory, AMD or NVIDIA graphics cards can be used, and the applicability is very wide.

Intel’s previous introduction shows that in super performance mode, XeSS improves performance by up to 153% compared to native 4K image quality, while super quality provides up to 27% performance improvement over native at 4K resolution.

Of course, the actual performance improvement depends on the specific situation.

Intel recently demonstrated the performance of XeSS in the “Death Stranding” game at an event in Japan. 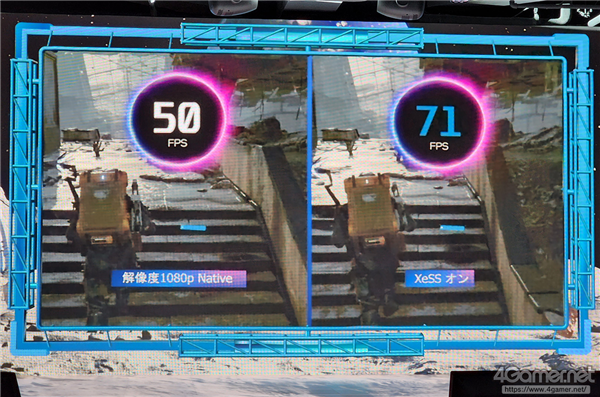 Judging from the pictures, the native frame rate at 1080p is 50fps, and after XeSS is turned on, it increases to 71fps, and the performance is improved by 40%, exceeding the 60fps mark, so that the scenes that are not very smooth can also benefit.

This is still the performance of Arc A380, which is a thousand-dollar independent display, and it is not clear which performance mode it is, but the actual game performance improvement of 40% is already very good, at least the first-time efficiency is not disappointing, and we will wait for more later.