In 2022, the layout of Intel’s 12th-generation Core processors is almost the same.

As for the server product line, this year is the Sapphire Rapids processor with Intel 7 process. , will also use the GoldenCove core architecture of the same generation of the 12th generation Core.

What’s next for server processors? There is not much information released by Intel.

The NXP website made a deduction based on various information, and estimated the specifications and architecture of the Xeon processor from 2022 to 2025, as follows: 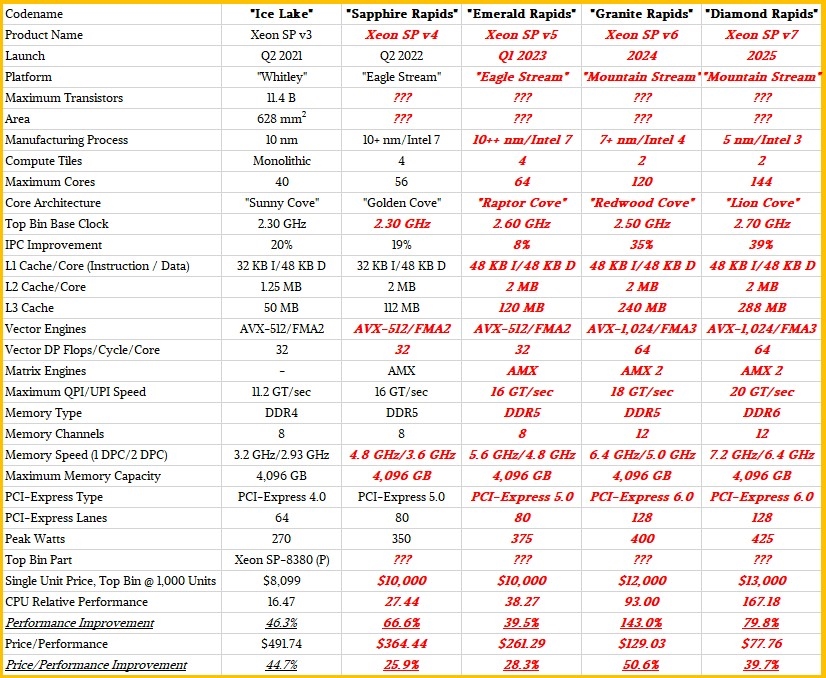 Starting from the Sapphire Rapids generation, Intel’s Xeon processors will use multi-chip packages.

Starting from 2024, the Xeon processors of the Granite Rapids series will start to soar the CPU core with the progress of the Intel 4 process (the 7nm+ process under the previous name), 2 computing modules can achieve up to 120 cores, and the architecture is also upgraded to Redwood Cove, IPC performance increased by 35%.

Of course, the price of 144 cores is not low, the CPU power consumption has been increased all the way to 425W, and the price has reached 13,000 US dollars, which is very expensive.

From this roadmap, Intel’s processors will achieve a leap in the Inte 4/3 node. After all, this is the first time Intel has used EUV technology, and the density has been greatly improved.

The number of single CPU cores has doubled from the current 30 cores to 60 cores or even Above 72 cores, the price is that the total power consumption has also soared, and the overall road is a large-area multi-core high-performance road.