Indian government plan: delivery of world-class RISC-V chips by the end of 2023

Indian government plan: delivery of world-class RISC-V chips by the end of 2023

The Ministry of Electronics and Information Technology of India has announced a DIR-V – Digital India RISC-V Microprocessor Initiative, an Indian native chip design and production program based on the open source RISC-V architecture , initially scheduled for implementation by December 2023 Design of industrial-grade chips, achieve commercial mass production and push them to the world. 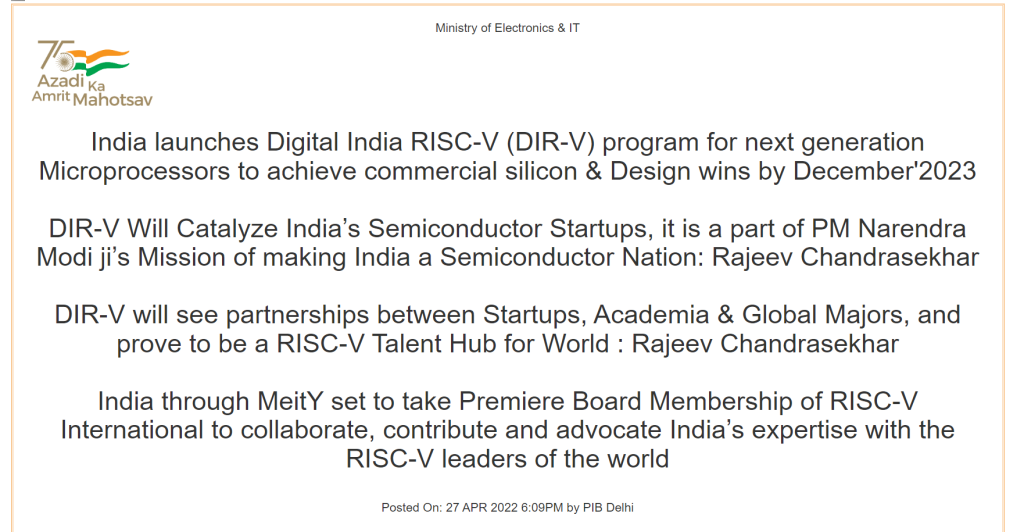 Rajeev Chandrasekhar, India’s Minister of State for Electronics and IT, a former Intel x-86 processor chip designer, said in the announcement that the Indian Ministry of Electronics and IT will join the RISC-V International Foundation as a principal board member:

Over the past decade, RISC-V has emerged as a powerful alternative to ARM and the x-86 architecture, which has no licensing burden and can be used for a variety of design purposes in the semiconductor industry.

The free and open nature of RISC-V allows it to bring together the ideas of the world’s top engineers, creating an unprecedented level of processor innovation, and even pushing Moore’s Law to its limits.

At present, India’s native RISC-V processor has two finished chips: Shakti and Vega, but the architecture of these two chips is not advanced.

The Vega processor’s architecture and process are more sophisticated, but it is far from the “world-class chip” goal expected by the Indian government.

In fact, the Indian government has attached great importance to the development of RISC-V since 2020, when it held a RISC-V-based chip design competition to promote the localization of RISC-V in India. And this DIR-V plan further shows India’s determination to develop its own chips.