Fewer than 10% of Firefox users on Linux are running Wayland

Fewer than 10% of Firefox users on Linux are running Wayland

Regarding Mozilla’s Telemetry feature, we can get some interesting insights into how many Linux desktop users still rely on X.Org (X11) servers and don’t have Wayland.

Jan EP has been thinking about Wayland’s market share on Linux desktops recently, and looked at Mozilla’s telemetry capabilities.

After he got in touch with the Mozilla telemetry team, the latter kindly generated a graph showing Firefox users’ X11 vs. Wayland usage as measured by these publicly collected data.

They allow this data to be shared publicly, but want to pass on these important footnotes to everyone.

– Based on a representative sample of 1% of all Firefox for Linux desktop telemetry data.

– Some distros build Firefox with telemetry disabled, which can deviate significantly from the results.

– Except for X11, everything else is Wayland.

The specific chart is as follows: 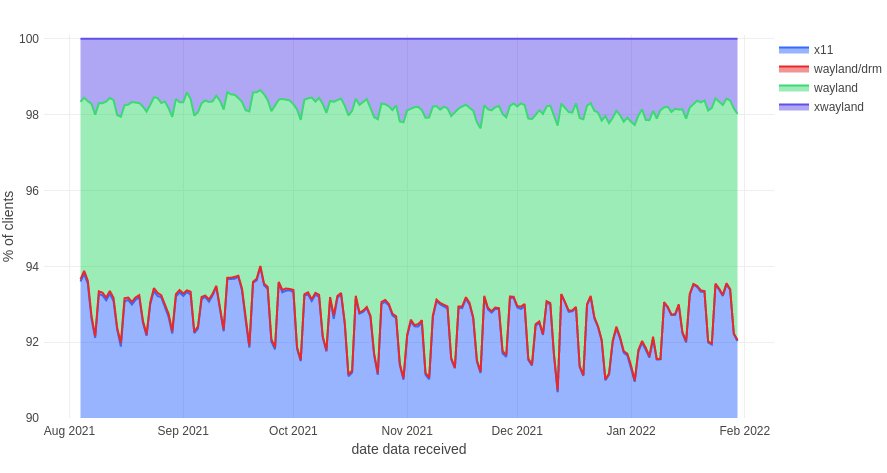 In these months of data, X11 usage has exceeded 90%, and on average, it is currently around 93%, while Wayland is around 7%.

It will be interesting to see how this data evolves once Ubuntu 22.04 LTS is released as their first Long Term Support release with Wayland sessions by default, and other Linux distributions that have been moving towards Wayland continue to emerge.

Of course, keep in mind that this data is only from Firefox Telemetry data.