Officials expressed their gratitude to the Linux developer community in the announcement , “Many of you provided valuable feedback on early releases and were kind enough to give us time to talk about Desktop for Linux expectations!”

According to the presentation, Docker Desktop is an easy-to-install application that enables users to build and share containerized applications and microservices; bundled with container tools such as Kubernetes, Docker Compose, BuildKit, and vulnerability scanning.

Developers can use Docker Dashboard to visually manage all their container resources, and Desktop also sets reasonable and safe defaults for resource consumption.

Not only that, but Docker Desktop now includes Docker Extensions, allowing developers to unleash their productivity by integrating other developer tools built by Docker partners, the community, or their teammates. 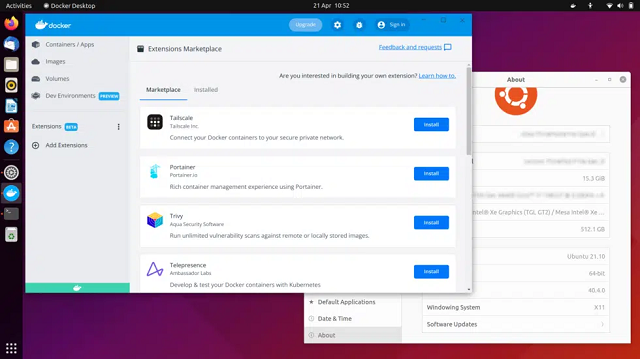 “As we rapidly add value to Docker Desktop, it is important to us that the Linux community can benefit from it. That said, developers who are happy to use Docker Engine on Linux can of course continue to do so. Desktop for Linux just ensures that Linux development People can take advantage of all the exciting new features built into Docker Desktop without compromising their existing CLI-based workflows.”

Users who want to use Desktop for Linux can visit the Docker docs for instructions. Officially provides deb and rpm packages, especially supports Ubuntu, Debian and Fedora.

An experimental package is also available for ArchLinux, and support for 64-bit variants of the Raspberry Pi OS is planned to be added in the next few weeks.

To report issues or provide feedback, visit the issue tracker .

Near-term plans for Docker Desktop for Linux include making the installation and update process as seamless as possible, such as installing with one command, such as apt-get install docker-desktop.

The team will also work with the Linux community to ensure the widest possible compatibility on the distribution of the user’s choice. Interested users can vote on the features they want through the public roadmap .