According to the latest news, AMD Zen4 architecture Ruilong 7000 series with X670 and B650 motherboards will no longer support DDR4 memory , but only support the new DDR5.

The price of DDR5 is still high, and the performance advantage is not obvious.

Intel’s next-generation 13th-generation Core will continue to be compatible with DDR4/DDR5 at the same time. Why does AMD make such a decision?

It seems that AMD is going to make a big move, and it is confident.

At the beginning of this year, we learned that AMD is preparing a memory overclocking technology called ” RAMP ” (Ryzen Accelerated Memory Profile), which is specifically aimed at Ryzen 7000, DDR5, and directly benchmarks Intel XMP 3.0.

Perhaps because the naming is too close, AMD has renamed this technology ” EXPO ” – not the meaning of the exhibition, but ” EXtended Profiles for Overclocking “, the meaning of memory overclocking expansion configuration.

In fact, in February, someone found that AMD registered the trademark of “AMD EXPO”, but it can only be seen that it is related to memory, the specific purpose is unknown, and now the bottom line is finally revealed. 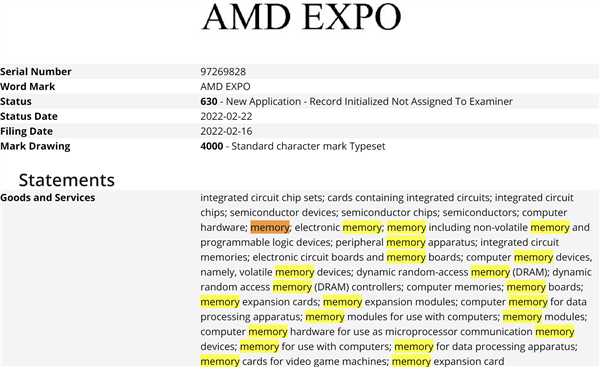 AMD EXPO can still be regarded as the version of Intel XMP 3.0 on its own platform, but it is not a simple copy, but has its own uniqueness.

It generally offers two DDR5 overclocking configurations, one optimized for high bandwidth and the other optimized for low latency , although the latter is optional.

It supports all types of DDR5, including UDIMM, RDIMM, SO-DIMM, which means it can be used not only for desktop platforms, but also for notebooks and even servers.

AMD memory support manager Joseph Tao has previously stated in a high-profile manner that as AMD’s first DDR5 memory platform, “Rapheal”, also known as the Ryzen 7000 series, will play a big splash on memory overclocking, which was considered impossible in the past. The frequencies achieved are all within the overclocking specification this time!

We all know that unless DDR5 memory has a higher frequency, it is difficult to open the gap with DDR4. If the Ryzen 7000 series can easily achieve ultra-high frequency DDR5, it will undoubtedly fully release its potential and really attract players to upgrade. .

It can be said that AMD is ready to fight.