On January 10, 2022, Chrome 98 will go to Beta, which will bring some interesting features, such as the color gradient vector font COLRv1, and the Origin version of the experimental video area capture function.

In this release, Chrome supports COLRv1 color gradient vector fonts as an additional new font format. COLRv1 is a color font that contains glyphs with multiple colors, which can be used in scenarios such as emoji or national flags or multicolor letters.

COLRv1 is an evolution of the COLRv0 font format, designed to make color fonts widely available on the web.

The figure shows an example of Noto Color Emoji, which is about 9MB as a bitmap font, but only 1.85MB as a COLRv1 vector font (after WOFF2 compression). 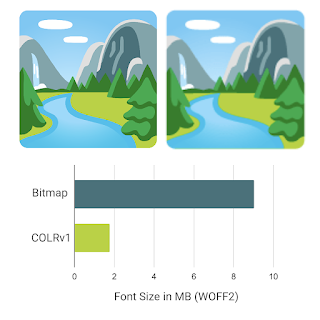 This version of Chrome introduces the Origin Trial feature , where developers can try out new features and provide feedback to the web community on the availability, usefulness, and effectiveness of new features.

Region Capture is an API for cropping self-captured video tracks , and currently applications can use getDisplayMedia() to get a capture of the tab they are running in, with or without preferCurrentTab.

Using Region Capture, the resulting video track can be cropped to remove some content from it.

The most typical scenario of this function is to share the screen, or only show a certain part of the screen during a video conference.

Since 2013, WebRTC’s SDES key exchange mechanism has been declared unacceptable for use in relevant IETF standards.

Its usage in Chrome has dropped significantly over the past year. SDES was removed because it was a security issue.

It exposes the session key to Javascript, which means that an entity that has access to the negotiated exchange, or is capable of breaking Javascript, can decrypt the media sent over the connection.

A more complete introduction to the new features can be found in the official blog .