At the CES 2022 exhibition, Phison released a new generation of PCIe 5.0 master chip PS5026-E26, which will be targeted at enterprise-level and high-end desktop gaming SSDs.

In 2019, Phison Electronics is the only manufacturer that cooperates with AMD Ryzen 3000 series processors to launch PCIe 4.0 SSD master chips.

For a long time, the PCIe 4.0 SSDs available on the market are all Phisons PS5016-E16 master chip.

This time Phison has made persistent efforts and once again released the PCIe 5.0 master control solution.

It provides a data transfer speed of more than 10 GB/s and can provide M. 2. Product requirements of U.3, E1.S, and E3.S specifications to meet different time difference requirements. 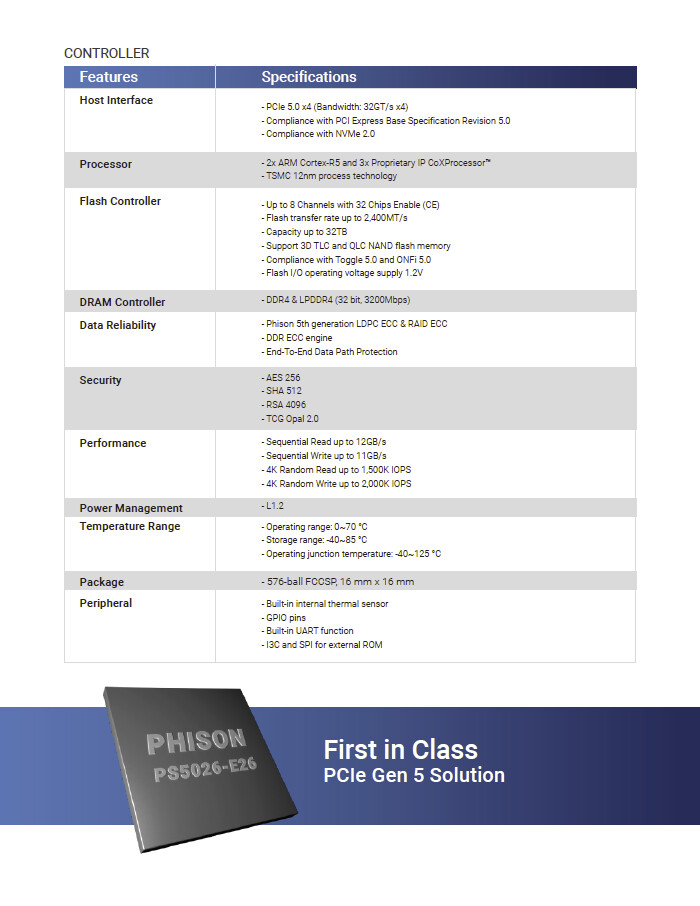 The former is the new PCIe 4.0 DRAM-free cache architecture product, which will replace the E19T and the E21T BGA, which is a higher level than the E13T, to provide a good experience for the next generation of mobile games.

The latter is the solution adopted by the Xiaomi Black Shark 4 gaming phone, providing excellent performance and efficiency, with a 69% increase in read and write performance, indicating that NVMe has redefined mobile gaming and will be demonstrated at the flagship of CES 2022.

The main control chip launched by Phison Electronics at the CES 2022 exhibition, combined with its chief technology officer Sebastien Jean, has previously talked about the development of future SSDs.

It is expected that products based on the new generation of PCIe 5.0 main control chip should appear within the year, and Will be equipped with a radiator.