It was reported on Tuesday that an incredibly sophisticated hacking group spent nearly two years infecting various routers in North America and Europe with malware that took full control of the operation of Windows, macOS and Linux internet-connected devices. Security researchers point out that the man behind the ZuoRAT attack on routers may have a deep and sophisticated background.

As part of a broader hacking campaign, the remote access trojan has been active since at least the fourth quarter of 2020.

Although rarely reported, by using routers to hide their intent, the malware can not only enumerate all devices connected to an infected router, but also collect DNS queries and network traffic it sends and receives.

Man-in-the-middle attacks involving both DNS and HTTP hijacking are also fairly rare, further suggesting that ZuoRAT has a fairly high level of sophisticated threat actors behind it. 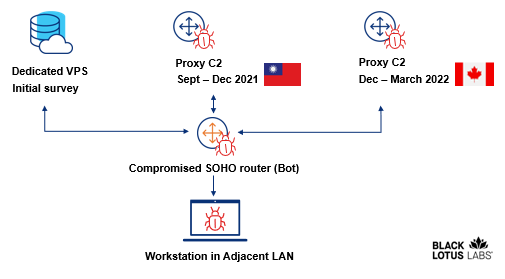 Black Lotus picked up at least four suspects during this malware campaign, and three of them appeared to be crafted from scratch.

The first is the MIPS-based ZuoRAT, which is very similar to the Mirai IoT malware and has been implicated in record-breaking distributed denial-of-service (DDoS) attacks, but it is often deployed using unpatched SOHO device vulnerabilities. Once installed, ZuoRAT will enumerate devices connected to the infected router.

Threat actors can then use DNS/HTTP hijacking to direct networked devices to install other specially tailored malware — including CBeacon and GoBeacon.

The former uses the C++ programming language, mainly for the Windows platform. The latter is written in Go and is primarily aimed at Linux/macOS devices. Figure 5 – The three-no-certificate included with the malware

ZuoRAT can also infect connected devices with the plethora of Cobalt Strike hacking tools, and the remote command and control infrastructure is dubiously complicated to conceal its true purpose.

During this period, Black Lotus security researchers noticed that the routers and C&C servers from 23 IP addresses established persistent connections, which means that the attackers are performing preliminary investigations to determine whether the target has value for deep attack.

Figure 7 – Screenshot of network traffic from the Go proxy

Additionally, the original ZuoRAT exploit can be removed simply by resetting the infected device. Function calls for the eight pre-built functions included with CBeacon

Even so, we recommend that you check for firmware updates for long-term connected devices.

Otherwise, once infected with other malicious software, it is still difficult for terminal device users to completely eliminate it.