Bitcoin holders lose more than $7.3 billion in cash in 3 days

Bitcoin holders lose more than $7.3 billion in cash in 3 days, hitting a record.

The latest weekly report released by the on-chain data analysis company Glassnode on the 20th pointed out that the Bitcoin market suffered a large-scale deleveraging event last week, whether it is the DeFi market on the chain, or the exchanges, lending institutions, hedge funds and many off-chain. Stuck in a position of insolvency, illiquidity or liquidation.

Glassnode pointed out that the past three days have set the largest realized loss in Bitcoin history.

Investors have realized losses of more than $2.4 billion per day for three consecutive trading days, with a total loss of $7.325 billion for three days. 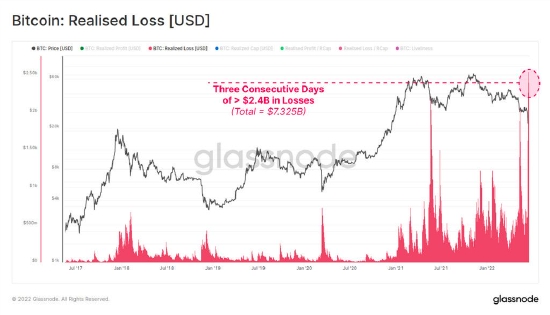 Glassnode found that as the market tumbled, many long-term Bitcoin holders were forced to surrender, and some even bought Bitcoin at the peak of $69,000 and sold at the bottom of $18,000. 75% of the loss, the current daily loss of long-term holders is 0.0125% of the Bitcoin market value.