Asahi Linux has begun to adapt to Apple’s M2 chip

Asahi Linux has begun to adapt to Apple’s M2 chip.

Asahi Linux is a project to port Linux to Mac devices with Apple Silicon chips, the goal of the project is not just to make Linux run on these devices, but to polish it to the point where it can be used as an everyday operating system .

Doing so requires a lot of development work, especially reverse engineering the GPU architecture and developing open source drivers for it.

Although it is only an Alpha version, it is used in tests such as PHP programming tests and recompiling the Raspberry Pi Linux kernel.

In the test, it also beat Apple’s own macOS, even 40% faster, and the development momentum of the project is also favored by everyone.

Hector Martin, the lead developer of the Asahi Linux project, recently said on Twitter that they have begun work on porting Linux to the M2 chip.

Although this work has only just begun, good progress has been made. In particular, a lot of existing Linux code written for the M1 will still work for the M2, but some new drivers will still need to be written before the new M2 Mac can fully use Linux.

Through a series of reverse-engineering/debugging/kernel work, Hector Martin confirmed that NVMe, USB and SMC functionality was working on the M2 on day one.

However, not all functions can be so lucky. For example, keyboards, trackpads, and SPMI of M2 devices need to rewrite a new driver to work properly.

In addition, functions such as PCIe and Thunderbolt currently have many problems. Not yet resolved.

As for the support for graphics cards, neural engines, video encoders and other functions, this is a problem that has not been completely solved on the M1 for the time being, and it has also been brought to the M2.

More details and Hector Martin’s activities around M2 Linux can be found via his Twitter : 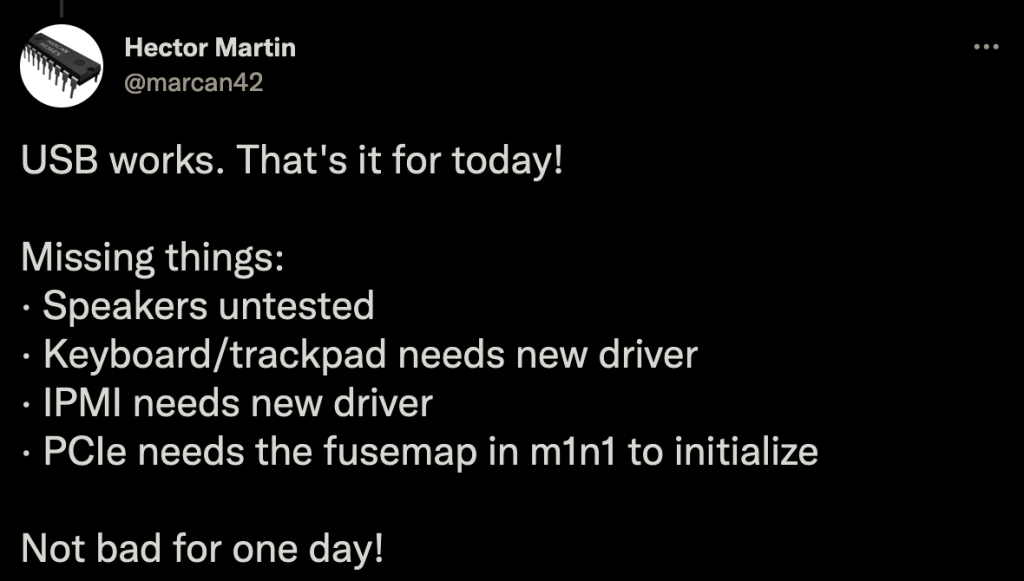 The tweet shows that currently missing support features include: