The fragmentation of the Android system is a problem that Google has been working hard to improve in the past few years.

Although Google brings a new version of the Android system every year, relatively few manufacturers actively respond, which leads to only a few mainstream products from well-known companies can Being upgraded has intensified the degree of fragmentation and exposed more loopholes in devices that cannot be upgraded.

Over the past few years, Google has occasionally shared some data on the global usage of each different version of the Android operating system, showing some of Google’s efforts to solve this problem.

However, these data have also been quoted by Apple and used at the press conference to compare the difference in system upgrade ratios between iOS and Android, “mocking” Android’s serious fragmentation, slow upgrade speed, and greater potential security risks. 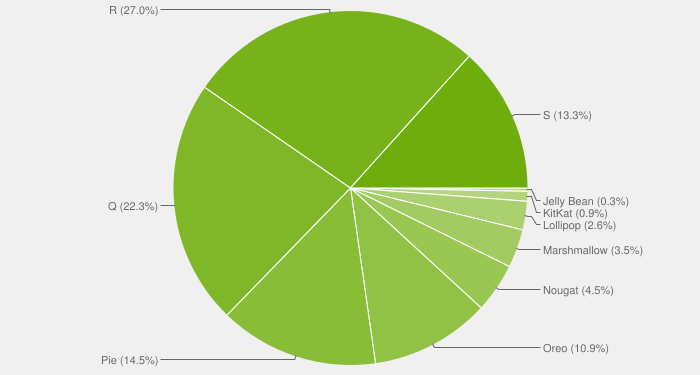 According to the distribution data of the Android Platform/API version in Android Studio, the ratio of the latest Android stable version operating system, namely Android 12, is only 13.3% (S), which has been a year since the launch of the system.

It ranks only fourth among all system versions, slightly higher than Android 8 (Oreo) released in 2017.

As can be seen from the above chart, the Android operating system version with the highest proportion is Android 11(R) released the year before, which accounts for 27%.

Android 10 (Q) followed closely, accounting for 22.3%, and the gap between the two was very small; as an Android version released in 2018, Android 9 (Pie) still accounted for 14.5%, which was still higher than that after four years. The latest stable version.

But having said that, Jelly Bean, as a ten-year-old Android system version, can still be on the list (0.3%).

When Google released this data, it was based on the system version used by Android devices that accessed the Play Store over a seven-day period from the announcement date.

Google has previously provided information on the proportion of Android system versions on the official website. Now Google no longer provides this data through these channels, but only displays this data in Android Studio.