For most DIY players, the headache is how to grasp the direction and scale of overclocking.

On this issue, more depends on the player’s experience and knowledge of the hardware.

Many gamers can find a “sweet spot” for their graphics card among a host of settings.

In order to facilitate user overclocking, many hardware manufacturers have launched their own overclocking tools.

For example, NVIDIA GeForce Experience can help players set the appropriate configuration in the game, and the XMP configuration that comes with memory can help you achieve default overclocking, and this is Where professional performance profiles come in.

According to VideoCardz, recently a developer is working on an update to the Radeon Monster Profile (RMP) tool.

For the first time, the program will support optimizations for Radeon graphics cards, and with the AMD Software Adrenaline driver, the graphics card’s optimal performance can be achieved.

According to the developer, the new RMP tool can adjust the voltage and frequency curves of Radeon 6000 series graphics cards to achieve stronger performance release. 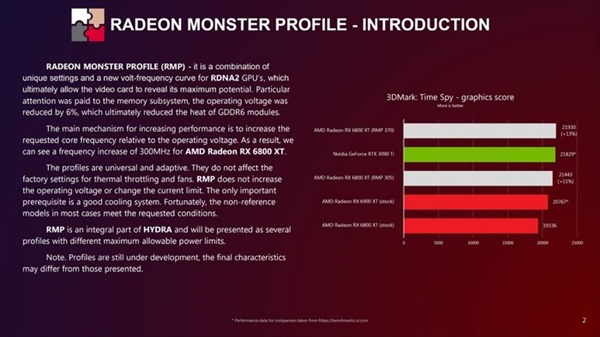 In the Radeon RX 6800XT example given by @1usmus, the RMP tool increased the graphics card frequency by 300 MHz.

This makes this graphics card better than its big brother, the RX 6900XT, in the 3DMark Time Spy test, and even better than the RTX 3090 Ti, with a 13% improvement. 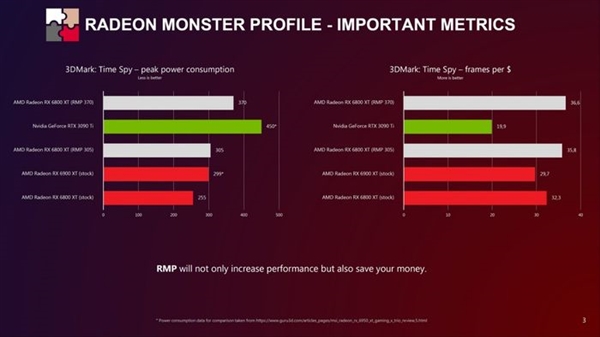 Overclocking is indispensable for cooling. With the latest RMP overclocking tools, you may need a better and more efficient cooling solution to get better results.

After all, super performance comes in exchange for power consumption. 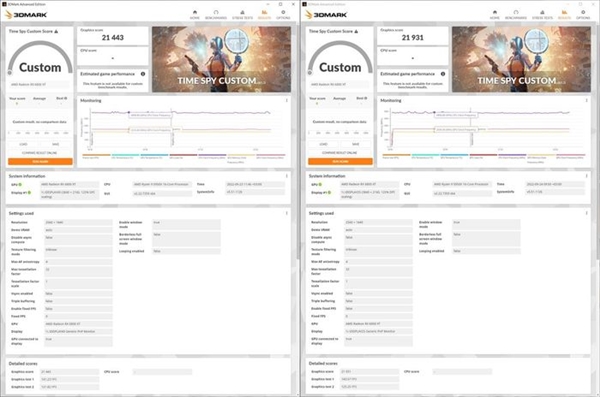 According to the disclosed data, the overclocked RX 6800XT’s score in the 3DMark TimeSPY running score increased from 21443 to 21931, an increase of about 2%.

The update of AMD RMP has indeed brought a certain performance improvement to the RX6000 series graphics card, but the power consumption has also increased.

If you want to achieve the same performance experience as in the PPT, the heat dissipation configuration should also be cost-effective, and like FSR 2.0, etc.

The function improves the performance of the graphics card and it is of little significance to blindly increase the heat dissipation to make the RX 6800XT catch up with the RTX 3090Ti.