Looking at it, the summer of 2022 is coming, and the person to be thankful every summer must be the mother of WiFi, Heidi Rama, who coexists with beauty and wisdom.

Previously, when 5G was first commercialized, some people thought that when 5G came, it might be the time when WiFi was withdrawn. But it turns out that even in 2022, WiFi will still be an integral part of life.

With the development of WLAN technology, families and enterprises are increasingly relying on Wi-Fi, and will It serves as the main means of accessing the network.

According to IDC data, global WiFi chip shipments will reach 4.9 billion in 2022. Mobile communication technology is being updated and iterated, and WiFi technology is also constantly developing. Before you know it, WiFi 7 has quietly arrived.

In recent years, the emergence of new applications such as 4K and 8K video, VR/AR, gaming, telecommuting, online video conferencing, and cloud computing has continuously increased the requirements for network throughput and latency. Early Stages of Fi Development

. And WiFi 7 is the next-generation Wi-Fi standard. Although there is more than one next-generation Wi-Fi standard, “WiFi 7” is just a commercial symbol used by the WiFi Alliance for the promotion of ordinary consumers, but it generally refers to the one that has not yet been finally approved. A new specification for WiFi devices based on the 802.11be draft released in May 2021.

According to reports, the entire protocol standard of WiFi 7 will be released in accordance with two Releases. 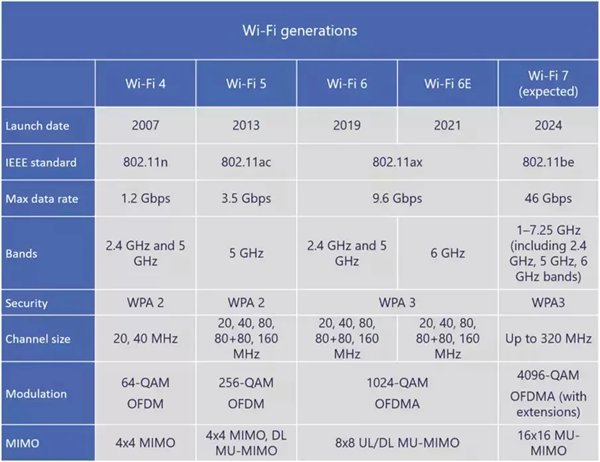 Compared to 2.4GHz, 5GHz, etc., 6GHz operates on a higher frequency band and provides greater bandwidth, which translates into faster speeds and more capacity for high-bandwidth and low-latency activities like streaming, gaming, etc. .

Currently, the 6GHz band is only occupied by Wi-Fi applications, and using it causes much less interference than the 2.4GHz or 5GHz bands. For faster connection, Wi-Fi 7 adds new bandwidth modes from the original 160MHz in Wi-Fi 6, including continuous 240MHz, discontinuous 160+80MHz, continuous 320MHz and discontinuous 160+160MHz.

Wi-Fi 7 attempts to enhance these links by increasing throughput, which is measured between devices in a local network (LAN).

In Wi-Fi 7, the number of spatial streams is increased from 8 in Wi-Fi 6 to 16, which theoretically can more than double the physical transmission rate.

Techniques such as MLO and wider channels mentioned above will further reduce network latency and make it more predictable.

Even if the global WiFi 7 technical specifications have not been finalized at this stage, driven by new concepts and applications such as Metaverse, autonomous driving, and AIOT, the industry is naturally optimistic about the development of the follow-up market.

Facing the objective blue ocean market in the future, the leading WiFi chip manufacturers will naturally have to seize the opportunity. Since 2022, Broadcom, Qualcomm, and MediaTek have successively released WiFi 7 main control chips or demonstrated their related technologies.

Broadcom was the first vendor to announce a complete Wi-Fi 7 portfolio, and in April, Broadcom launched its first Wi-Fi 7 SoC, called the BCM4916, featuring a quad-core Armv8 processor with 64KB of L1 cache and 1MB of The L2 cache, capable of delivering 24 DMIPS of performance. The SoC supports DDR3 and DDR4 memory, as well as 2.5 Gbps and 10 Gbps network interfaces, and provides a USB 3.2 interface. 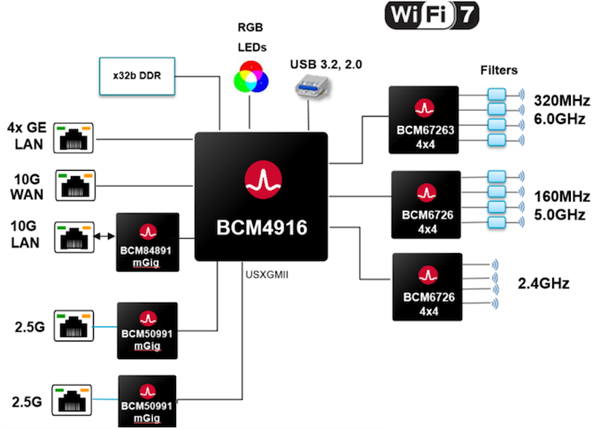 In addition, Broadcom announced its WiFi 7 ecosystem product portfolio, including the BCM6726 and BCM67263 for consumer products, the BCM43740 and BCM73720 for enterprise products, and the BCM4398 for mobile devices.

At the end of February this year, Qualcomm launched the world’s first WiFi 7 chip “FastConnect 7800”.

At present, FastConnect 7800 has been sampled and is expected to be put into commercial use in the second half of this year. The first customers include Acer, Asus, Honor, Meta (Facebook), OPPO, Tencent, vivo, Xiaomi, etc.

In January this year, MediaTek conducted the world’s first live demonstration of WiFi 7. It is reported that compared to the 160MHZ channel of WiFi 6, MediaTek WiFi 7 can use 320MHz channel and 4K Quadrature Amplitude Modulation (QAM) technology.

Under the condition of using the same number of antennas, the transmission speed is 2.4 times faster than WiFi 6, and the peak speed is completely It can reach 30Gbps defined by IEEE 802.11be.

MediaTek revealed that products using WiFi 7 technology are expected to be available in 2023. In addition to the WiFi main control chip, different WiFi technologies have different requirements for RF products.

Since the WiFi 5 standard, WiFi RF front-end chips have been gradually externalized. The process requirements are also higher.

Vendors including Qorvo have also begun to strengthen the deployment of Wi-Fi 7 chip front-end modules (FEMs).

In January of this year, Qorvo introduced the first wideband front-end module (FEM) covering the 5.1 GHz to 7.1 GHz frequency band. This new tri-band FEM not only maximizes capacity, but also simplifies design, reduces time to market, and integrates Front-end board space is reduced by 50%.

Although this FEM is mainly to improve the tri-band Wi-Fi 6E function, the expansion of frequency band coverage has also shown that Qorvo is bound to win the Wi-Fi 7 chip FEM.

In 2019, the birth of the Wi-Fi 6 standard and market demand brought great opportunities for chip and cellphone manufacturers.

The upcoming Wi-Fi 7 is bound to be a new opportunity for networking and cellphone manufacturers and push manufacturers to speed up technology development and upgrading.