On October 13th, Microsoft Corporation  announced that it will launch a graphic image design software called “Desinger”, which will provide a free version and a high-end version. “Office Family Bucket”.

The developer of Canva, based in Sydney, Australia, was valued at $40 billion in a financing deal last year, making it one of the world’s most valuable private technology companies.

However, according to reports, early this year, due to inflation, recession and other worries, the stock prices of software companies have plummeted.

In order to prove that membership is worth the money, Microsoft has been adding new software or new features to the package.

In the global office software market, Microsoft Office is the undisputed ruler, and many companies are challenging its dominance. The strongest challenger is Google.

On Tuesday, local time, Thomas Kurian, CEO of Google’s cloud computing business, announced that the number of paid members of Google’s online office software “Workspace” has increased to 8 million. For comparison, in April 2020, there were only 6 million paid members.

Canva is preparing to complement more office functions like Office.

Canva said the number of paid teams currently using the company’s office software is 55,000, and these users come from big companies such as Amazon, FedEx, Pepsi, Pfizer, Salesforce and others.

But in fact, this design software is also very useful for users in companies, government agencies and schools, and these markets are also Microsoft’s key customer base.

After the launch, if the feedback from users of the Designer software is good, the company will roll it out to a wider market, including corporate employees, the spokesman said.

At present, the global economic environment is not good, and some companies have begun to take measures to reduce operating costs, such as reducing the number of software suppliers.

Media reviews point out that some users may abandon Canva if Microsoft adds a graphic design software to Office’s existing membership package.

Whether it affects the relationship with Adobe

In the field of graphic image design, Adobe Corporation of the United States is also a heavyweight manufacturer.

The company has launched a free “Adobe Express” design tool, which contains a large number of templates and picture materials.

Microsoft will also become a competitor and challenger to Adobe if it launches free design tools.

At an event held by a Bank of America earlier this year, Jonathan Vaas, Adobe’s vice president of investor relations, said that many beginners in graphic design use Canva, and after they get used to it, they will jump ship and become Adobe users.

It should be pointed out that Microsoft and Adobe are close partners, and the two companies have carried out more than 30 software product integration cooperation.

A Microsoft spokesperson said that in the future, Adobe will still be an important strategic partner of Microsoft, and that the design software launched by Microsoft for consumers will not affect the relationship and cooperation between Microsoft and Adobe in any way.

Features of the software

In an official blog post, Microsoft Vice President Liat Ben-Zur said that in the Designer software, users can use templates to quickly design and process, and generate images that can be used in social media.

Just last month, Canva co-founder and COO Cliff Obrecht said that for Canva users, social media is the biggest platform for posting and sharing their designs.

However, Obrett also stressed that Microsoft is not a competitor of Canva, the company’s main competitor is Adobe.

According to reports, OpenAI, an artificial intelligence company supported by Microsoft, has launched a software called “Dall-E 2”.

Microsoft Designer will be integrated with this artificial intelligence software.

Users only need to enter some text, and the software can automatically generate design patterns.

In addition, neither Microsoft nor OpenAI wants to have some content in the Designer design that should not be published.

Microsoft executive Benzer said that OpenAI will use a large amount of data training results to filter the pictures generated by Designer to remove pornographic and violent images.

In addition, according to Microsoft’s latest research and development results, Designer will be able to generate more varied and diverse patterns.

Currently, individual users can join a waiting list to get a preview version of Designer for subsequent releases, a Microsoft spokesperson said.

Once the software development is complete, Microsoft will launch a free version and add a premium version of Designer to two membership packages (“Microsoft 365 Personal” and “Microsoft 365 Home”). 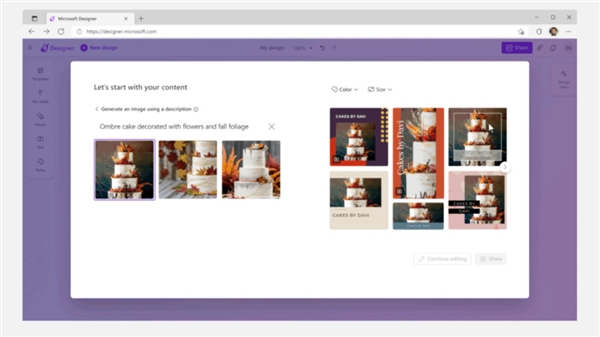