A new round of x86 processor battle begins: Intel fights back or AMD defends?

Although the 12th generation CPU is very competitive, it only included 6 desktop CPUs at the time, and did not cover the mid-range desktop and notebook platforms.

And on January 5th, everyone finally waited for the mobile version and the desktop version of the 12-generation Core at CES.

The mobile version includes 28 new products, and there are as many as 22 new products on the desktop, covering almost the entire product line and the full price range from dual-core Celeron to the top i9.

And AMD also released a new Ryzen 6000 series mobile processor at CES, and a new processor war for the X86 platform has begun. Will this year be staged the “Intel Counterattack” or the “AMD Defending Game”? 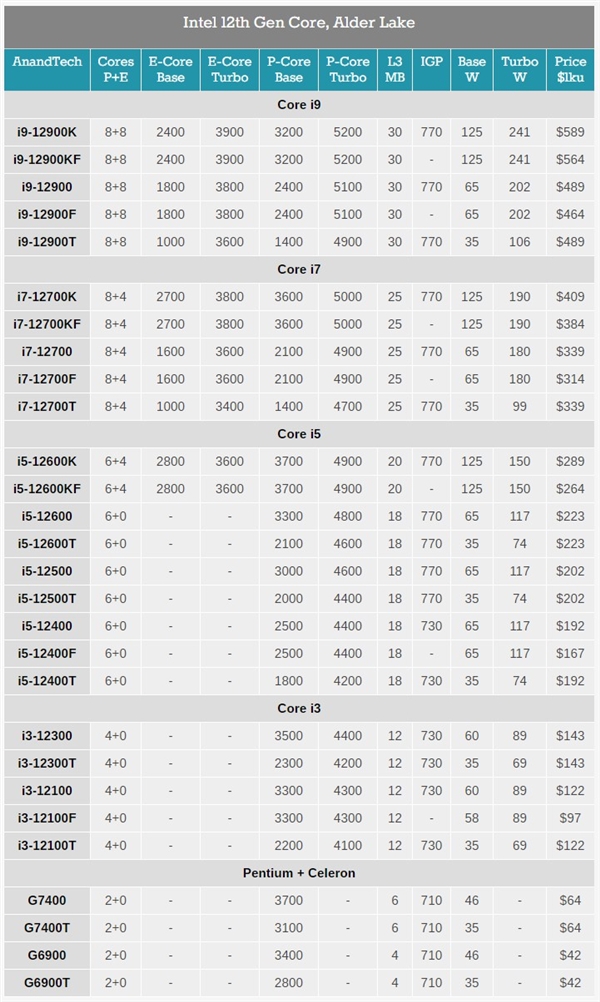 A new round of x86 processor battle begins: Intel fights back

Including the previous 6 models, the current 12-generation Core desktop product line has 28 products.

The i9, i7, and the highest-end two i5 have energy-efficient cores, and the number of cores configuration has not changed much for the next products: 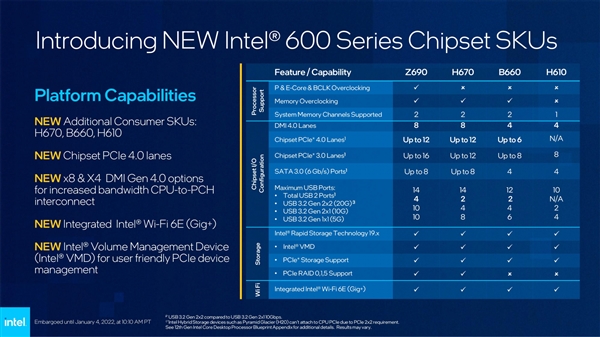 Of course, what makes players most happy is the H670, B660 and H610 motherboards released together. Compared with the expensive Z690 motherboards before, it can effectively lower the price of the 12th generation Core board U package.

In addition, Intel has finally updated the official radiator, including the RH1 radiator with RGB lights, and the copper bottom, which can press the i9 with 202W Turbo power;

while the i3 to i7 products are equipped with RM1 radiators, which can cope with CPUs with 180W Turbo power. The entry-level Pentium and Celeron match the RS1 radiator.

Mobile terminal: 3 series of 28 new products, claiming that the performance per watt is higher than M1 Max 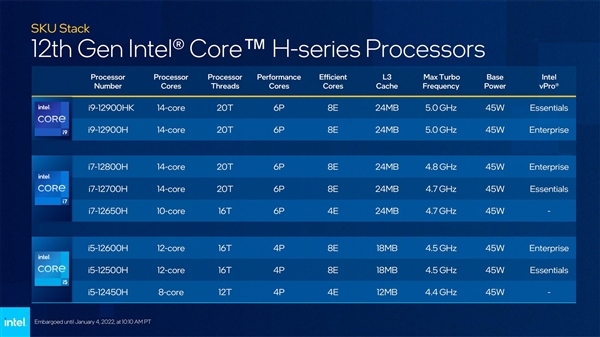 Intel said that more than 100 products will use 12-generation standard pressure processors, covering different products from 35W to 65W, claiming that the performance per watt is higher than that of Apple M1 Max and AMD R9-5900H (here it is stretched because of the absolute performance improvement Energy consumption ratio.

The new Alder Lake-P series processors are specifically designed for workstation platforms. There are 6 models in total. The core specifications are the same as the Alder Lake-H standard version. However, the frequency is reduced in pursuit of energy efficiency, and the TDP is reduced from 55W to 28W.

There are 14 models for the ultra-thin Alder Lake-U low-voltage version, 7 models each for 15W TDP (named “12X5”) and 9W TDP (named “12X0”), mainly due to the frequency difference. Here we mainly mention the former: 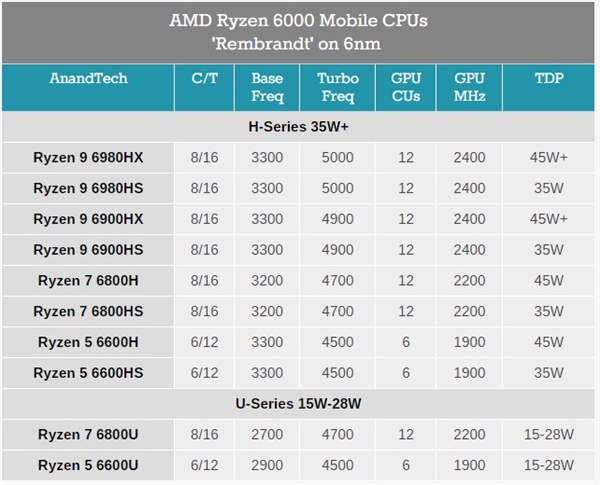 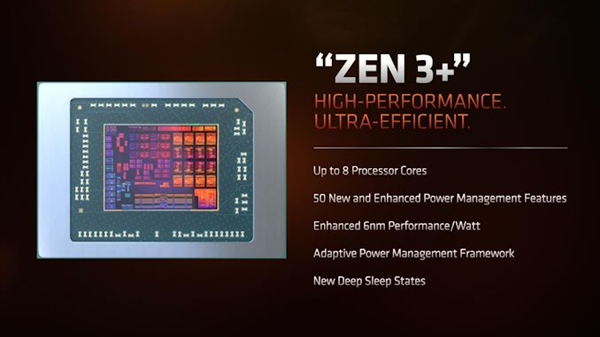 to reduce idle and high-frequency power consumption, and improve the battery life of mobile devices, AMD claims that the power consumption of web browsing and video playback is reduced by 15%-40%.

Other improvements to the CPU include support for DDR5 memory (DDR5-5200 and LPDDR5-6400), support for PCIe 4.0, native support for USB4 (which can run Thunderbolt 3), and AV1 hardware solution. 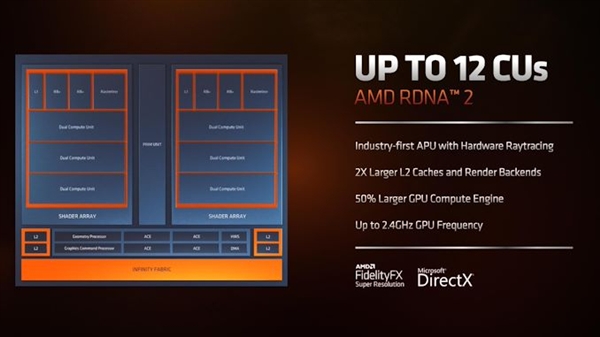 Compared with the improvement of the CPU part, the GPU part is much more exciting. RDNA 2 is the strongest nuclear display in AMD history, and its performance is directly doubled.

The RDNA 2 core display has 12 sets of CUs, and the frequency has been increased from 2.0GHz of the previous generation to 2.4GHz, the cache is doubled, the raster performance is doubled, the rendering back-end is doubled, and it supports ray tracing, Awesome!

With AMD FidelityFX technology, it is claimed that the number of game frames can be increased by 20%-60%.

In addition, the 35W standard pressure platform can be used with AMD graphics cards to use SmartShift Max, allowing the CPU and independent display to dynamically adjust the power to improve performance.

AMD said that new products equipped with the mobile version of the Ryzen 6000 series processors will go on sale in February, and more than 200 related products will be available in 2022.

The notebook mobile processor war kicks off in 2022

After years of development of squeezing toothpaste, the X86 platform processors in recent years have made great progress in both desktop and mobile notebooks.

Especially in the CPU part, the progress rate of the X86 platform far exceeds that of the ARM platform.

When Qualcomm, Samsung, and MediaTek all encountered bottlenecks because of ARM’s public CPU architecture, there was Ryzen 5000 on the X86 platform a year, and the 12th-generation Core and Ryzen 6000 this year. Intel and AMD are fighting happily.

On Intel’s side, the hybrid architecture introduced by the 12th generation Core Duo is more like Apple’s “performance core + energy efficiency core” (P core and E core), rather than the “big and small cores” of the Android camp/public version of ARM, with a smaller area Energy-efficient cores use the core to improve multi-core performance, while single-core performance is promoted by large-scale performance cores, which can continue to extend and straighten the energy consumption ratio curve of the processor.

If there are any obvious shortcomings of the 12th-generation mobile version, it is the design of “performance core + energy efficiency core” and massive product SKU, which makes it exponentially more difficult to understand product specifications, and even players can easily see the circle.

On AMD’s side, with TSMC’s strong process advantages and the support of the Zen architecture, the Zen 3+ architecture can continue to push up the frequency. Judging from the performance of the previous 12-generation Core Duo on the desktop, the CPU performance of the 12-generation Core Duo in the mobile version may be higher than that of the Ryzen 6000 series mobile version.

But the biggest feature of this generation of 6000 series Ryzen mobile version is actually the doubled performance of the RDNA 2 GPU, which greatly reduces the entry barrier for 3A masterpieces.

It is still unknown whether 2022 will be the “Intel Strikes Back” or “AMD’s Defending Battle”, but the notebook mobile processor war has kicked off.

Until the 12th-generation Core and Ryzen 6000 series notebook products are sold on a large scale, there will be no I recommend buying the previous generation of products,

A new round of x86 processor battle begins: Intel fights back